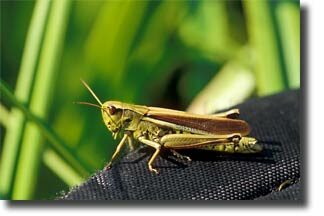 Grasshopper Habitat Depends Upon The Species

Grasshopper habitat can be difficult to pinpoint, as there are at least 10,000 different species that have been documented to date, with additional species constantly being discovered. Since different species may prefer different habitats, one could almost say that, except for extremely frigid environments, one is apt to find one or more species of grasshopper almost anywhere. In a given region, several species may share a common habitat, though a single species often dominates.

If You Plant It They Will Come – Good grasshopper habitat would be anywhere there is an abundance of good food to eat. Grasshoppers eat mainly cereal crops, grasses, and leaves. Some feed by climbing on plants or grass blades, others are strictly ground feeders. Some species are scavengers or gleaners, eating the parts of plants and leaves that other grasshoppers have left behind. Grasshoppers will flock to any area where there is an abundance of food. One might wonder how they can eat so much. The grasshopper is a big insect but not all that big. The fact is, a typical grasshopper will eat up to 16 times its own weight in a day.

Agriculture organizations, including the US Department of Agriculture and various state and local agencies, have a vested interest in grasshopper management in lieu of the damage they can cause to crops, and in your own garden for that matter. Although in a specific grasshopper habitat you will find the species that reside there tend to be rather selective eaters, they will sometimes get into a frenzy, eating everything in sight. Fortunately that action is limited to a minority of the different species.

Grasshoppers are cold blooded creatures and grasshopper habitat will take this into account. They need sunshine to warm up and get around to the business of eating, and doing what grasshoppers do, and become inactive or dormant on cool cloudy days, or anytime the temperature drops. A grasshopper’s color may be a factor in the habitat it chooses, this being related to temperature as well. The type of food available is the main grasshopper habitat factor of course, with grasslands for example attracting those species which feast mainly on grasses.

A Sampling Of Grasshopper Habitats – The US Department of Agriculture, as a part of its attempts at grasshopper management, has identified 11 types of grasshopper habitat in the western part of the United States. Each of these habitats plays host to a number of different identified species, plus very likely a few which have not yet been identified. It isn’t at all unusual to find 6 to 10 different species within a single habitat.

The identified habitats are as follows:

Disturbed land is where most of us observe grasshoppers and would be by roadsides, near the edges of cropland, and lawns and gardens.

A Movable Feast – Just browsing through the above habitats makes it easy to understand why it’s difficult to define grasshopper habitat at all definitively. Complicating things somewhat is that grasshoppers dare not particularly territorial, although they would be expected to hang around an area where there is always a plentiful source of food. They will migrate long distances however in search of greener pastures whenever the food supply dwindles. Although most species of grasshoppers are made up of individuals who, aside from mating, ignore their fellow grasshoppers and go on about their own business, some species will gather in groups of a million or more at times for the purpose of mass migrations. Whether you see them by the millions or, hopefully, one at a time, grasshoppers are everywhere, and grasshopper habitat is almost everywhere as well.