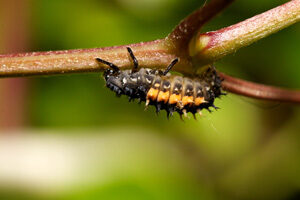 Ladybirds, as they are called in the UK, Ireland, Australia, New Zealand, and other countries, are known in the United States as ladybugs.  Among the scientific community, the preferred names are lady beetles and ladybird beetles.  Other less common names might be lady cow, lady fly, and ladyclock.  These adorable insects are quite small and are known by their scarlet, yellow, or orange color with small black spots.  They are favored by children because they truly are adorable insects.  Although most are known by their bright colorings, there are species of these insects, Coccinellids that can be black, grey, or brown, making them difficult to identify.  Also, there are different species of beetles that can be mistaken for ladybirds because they are similar in appearance.  These insects originated in the Middle Ages and are thought to be symbolic of good fortune.  The lifecycle of the insect takes it from eggs to larvae to pupae to adult beetles.

There are more than 450 species of ladybird beetles in North America.  They offer benefits to the places they inhabit because they feed on certain pests that can cause crop damage, such as mites, small insects, and insect eggs.  Ladybird larvae can also be beneficial because they feed on aphids and other insects as well.  The larvae develop quickly, as it feeds quickly and frequently.  The ladybird lays eggs in large numbers, up to 1000 over a few months.  The eggs are usually cream, yellow, or even orange.  When they become larvae, they are very dark and have prominent legs.  The larvae will generally develop over a 20 to 30 day period.  As the larvae grow, it changes in color, eventually turning the oranges, yellows, and reds of the adult beetle.

Ladybird larvae are unusual looking, and are far from as adorable as its adult counterpart.  The ladybird larvae generally emerge from the egg and remain still for a period of about an hour.  This allows for the hardening of its outer shell.  Once it starts moving, it is likely to feed on both hatched and unhatched eggs.  The rest of larval life involves molting, frequent feedings, and eventually becoming the pupae that will become the adult beetle.  Typically the larvae develop over a period of 20 days, and are voracious hunters during this period, making them favorites for farmers and anyone else interested in eliminating pests.

Throughout history, ladybirds have been symbolic of many things in various cultures.  One of the most common things ladybirds are believed to be symbolic of is good luck.  In England, it is believed that the number of spots on the insect is representative of the number of months of good fortune that are in store.  They can also represent other things.  Some cultures believe that a ladybird landing on the hand of a girl signifies that she will be married soon.  Also, some believe that when one lands on a woman, she is to count the number of dots on the insect to determine how many children she’ll have.  It is considered bad luck in many cultures to kill one of these adorable insects.

These favorites in the insect world are loved by children and adults all over the world.  From laying the eggs, through all stages of development, ladybirds can be beneficial in many ways to the environment.  Ladybird larvae can devour many insects very quickly, as it frequently feeds in its short lifespan.  Once it becomes an adult, it can be even more of an asset to crops and garden, because it continues to eat many common pests.