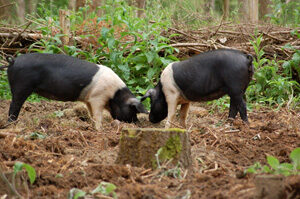 A Few Facts About Saddleback Pigs

British Saddleback pigs are famous for their appearance as well as the high quality of their meat. The pig is also in most circles regarded as an easy breeder because of its mellow temperament and ease in handling. It gets its name from its rather striking color pattern. Saddleback pigs are black with the exception of an unbroken white band over the shoulders and down the front legs. The band passing over the shoulders gives the appearance of a white saddle. Some saddleback pigs have traces of white elsewhere, such as the tip of the tail, or in some cases on the hind legs. This added white coloration is not regarded as detrimental in the show ring.

It’s In The Ears And Coat Pattern – One of the reasons for the popularity of British Saddleback pigs is its temperament, which makes it an easy breeder. Some credit this to the fact that it is a lop eared pig, and many pig fanciers will say that lop eared breeds in general have more gentle dispositions than their prick-eared cousins. In fact, saddleback pigs could be called positively docile when compared to other breeds, a number of which become quite ill-tempered when fully grown. Others will tell you that pigs with a saddleback pattern, and there are many breeds sharing this distinction, have a gentler temperament and produce better pork than their less colorful counterparts. Whether there is anything to this or not, it is generally accepted as fact that saddleback pork is of a higher quality than the ultra lean pork coming from most of the other meat producing breeds.

A Good Starter Breed – The British saddleback is a very prolific breed, perhaps one of the most prolific, which is yet another reason it is such a favorite among those who breed and raise pigs for the marketplace. The sows have a fairly long life span and continue to produce litters much longer than do most other breeds. They are considered to be an excellent starter breed for the small farmer or one just getting into the business. Another advantage is that this breed can be successfully farmed in warmer climates, as their black coat protects them from sunburn, an affliction somewhat common to pinkish and white breeds. It can also be said, that the British Saddleback pigs are rather handsome animals. If you see a photographic image of one, you’ll very likely agree.