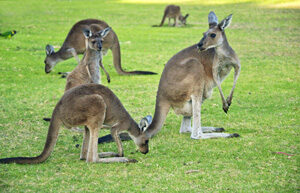 From where they originate to the way they move to kangaroo reproduction, this particular animal is one of the more interesting on the planet.  Officially a marsupial, kangaroos fall into one of two different families.  The first is the Macropodidae, which includes kangaroos, the standard type, tree kangaroos, wallabies, forest wallabies, wallaroos, and pademelons.  The second family is the Potoroidae, which consists of rat kangaroos, bettongs, and potoroos.

Of all living creatures, kangaroo reproduction is by far the most unique and heavily studied.  As you are about to discover, the entire process of mating to birthing is fascinating.  For starters, females, which are called does and males known as bucks meet up during the rainy season in areas where vegetation is in abundance.  With so many kangaroos coming together to feed, this time of year is when most mating occurs.  From the day of conception to the day of giving birth to a baby kangaroo, which is called a Joey, is between 33 and 36 days.

However, as part of kangaroo reproduction are some facts that seem too bizarre to be true, but they are.  For instance, during the dry season or times of drought when food and water are hard to come by, the doe has the capability of suspending development of the embryo.  In other words, using a process called “Embryonic Diapause”, she literally freezes embryo production until food and water is once again available.  There is no time limit to this suspension, which makes this so amazing.  In addition, bucks will no longer produce sperm during seasons of drought, which means kangaroo reproduction literally comes to a halt.

Another fascinating aspect of kangaroo reproduction is that for the doe with a young and older Joey, suckling would occur from two different systems.  In other words, the older Joey would suckle on one teat from a mammary gland of milk made to sustain life for older kangaroo babies whereas the young Joey would suckle on another teat associated with a second mammary gland of milk comprised of different nutrients needed for small babies.  That way, the younger Joey is consuming high-fat milk whereas the older one is not.

When the Joey is born, it is as small as a lima bean, blind, and completely hairless.  Even so, this tiny creature is capable of finding its way inside mom’s pouch where it will remain for up to 1.5 years.  Even the gender is something the doe can control, yet another marvel for kangaroo reproduction.  Initially, she will choose to have only females but as she matures, she will change so only males are born.  While it has been proven that the doe has this control, the way it works is something that continues to mystify experts.

Sadly, about 50% of all Joeys will not reach more than two years old.  In fact, approximately 90% of all Joeys die prior to age 10 due to so many predators such as the python, eagle, goanna, an Australian lizard, and dingoes that prey on older Joeys.  This coupled with increasing seasons of drought has raised concern over kangaroos sustaining life.  The bottom line is that the kangaroo reproduction is indeed a miracle, something not seen with any other living creature.