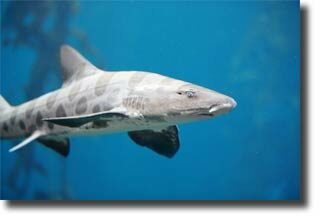 While obviously fascinating to watch, pet sharks fall into the category of exotic pets, which means they need not only special care, but in some cases can be a challenge to keep. This is one type of pet where you really need to do your homework before going shopping.

Even if you’ve had plenty of experience with pet dogs, cats, and goldfish, pet sharks are a different story entirely. The first piece of advice is not to buy a pet shark unless you’ve had previous experience in keeping saltwater fish in an aquarium. In fact your aquarium experience should include larger saltwater fish, the Clown fish being an example. Even if you decide upon purchasing one of the freshwater sharks as your pet, you still should have some prior experience with keeping reasonably large fish.

Freshwater Pet Sharks – Most of the freshwater sharks that are for sale, are smaller in size than saltwater sharks tend to be. Some can still be good sized however. Most of the freshwater sharks on the market are not true sharks. If that doesn’t matter to you, you might find the freshwater varieties a little easier to care for. There are freshwater sharks which are true sharks, but they are rather rare and, if available at all, can be quite expensive. The Red Tail is a popular freshwater shark, but it’s best to get just one, as the Red Tail tends to be very aggressive towards other sharks, and other fish as well. As an adult, the Red Tail will reach 5″ to 6″ in length, so does not take up much room, but aggressively defends whatever room you will give it. The Bala shark is another popular breed. It can grow to be anywhere from 7″ to 14″ long. The Bala grows rapidly, and the tiny fish you purchased may soon get a little large for a 50 gallon tank. It’s a very lively fish, and gets on well with other sharks. You’ll need a lid on your tank, as the Bala is a jumper and could end up on your living room floor if you’re not careful. A good freshwater shark choice for the beginner would be the Iridescent shark, which grows to be about a foot in length, and has a very peaceful disposition.

Saltwater Pet Sharks – If you do elect to go the saltwater route, pet sharks in this category will require more room, quite a bit more room in some cases. Insofar as saltwater pet sharks are concerned, the various types of reef sharks are probably your best choices. Reef sharks, such as Grey reef sharks, White tip and Blacktop reef sharks are not terribly large, as far as sharks go, but can grow to between 3′ and 6′ in length. Reef sharks are seldom aggressive towards humans, preferring much smaller prey, but do have very sharp teeth and you need to be cautious with them, you could get a bite by mistake. The Nurse shark is another saltwater shark that is not generally aggressive towards people, but unless you have a 1,000 gallon aquarium, you’d find that as pet sharks go, the Nurse shark can grow to be a bit too large to handle.

No matter what you decide upon, do some research on the species first and then visit a breeder or pet shop and get a first hand look. Make several visits, and ask plenty of questions. If you’re not getting many answers, shop somewhere else. You don’t want to bring a shark home and be at a loss as to what you should do with it. Different species have different eating habits, and to some extent different habitat requirements. All need clean clear water, whether it’s freshwater or saltwater. Most sharks when young, eat only live food, though some will do fine on fish flakes as a start. Sharks seem to like a variety in their diet, but are not garbage disposals, and when they have had their fill, will ignore any other food placed in the aquarium. In spite of their fearsome reputation, sharks are not gluttonous, and if you overfeed them, the food will simply fall to the bottom of the tank, decompose, and foul the water.

It is not a good idea to buy pet sharks over the Internet. It’s best to see first hand, and select for yourself, what you are going to bring home. The Internet however is a very useful resource once you have a shark in your possession. Forums on the Internet, or a local aquarium club, can often provide excellent support in the caring for your little, soon to be larger, shark friend.