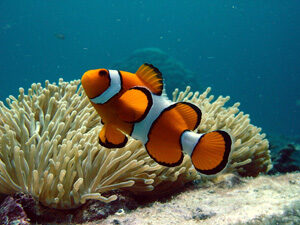 Are you interested in learning clownfish facts? Clownfish have always been a fairly popular variety of aquarium fish, however there has been a recent boom in the interest in this species. This is likely related to the children’s movie “Finding Nemo,” which features an animated clown fish. If you are interested in owning this fish yourself, it is important to boost your knowledge of clownfish facts to ensure that you are prepared for the responsibilities of owning an exotic fish.

There are actually 28 different types of clownfish. The most popular variety is called the percula clown fish. This one is bright orange in color with white stripes running from top to bottom. These stripes are often outlined in black. The size of the fish itself ranges anywhere from two to five inches in length which makes them a very accommodating species for a home saltwater aquarium. The males are often quite a great deal smaller than the females. Because of this fish’s size, it has never been in any danger from hunting by fishermen.

The clownfish hails from the warm waters of the Pacific and Indian oceans. They are largely found in areas near eastern and southeastern Asia, Japan, as well as Northern Australia. In its natural habitat the clownfish will stick to the protective elements offered by shallow lagoons and reefs. Clownfish like privacy and are often seen in pairs of two. They have what is known as a “symbiotic” relationship with sea anemone. Even though the sea anemones have poisonous tentacles, they do not sting the clownfish because the fish are beneficial to the anemone. Any leftover bits of carcass from the anemone’s meals are finished off by the clownfish and they also eat away the anemone’s dead tentacles, all of which works to keep the anemone’s environment nice and clean.

The lifespan of a clownfish is about three to five years when spent in captivity. In tropical waters, clownfish will spawn year round rather than at specific times of year. A male attempts to attract a female by chasing and nipping at her. Before the mating actually takes place, the male will search for an area that he feels offers good protection, such as anemone, rocks, coral, etc. He will then build a nest. The female will lay her eggs in the nest—anywhere from about 100 to a whopping 1000 eggs—after which the male will stand guard to make sure predators do not harm them. One of the most interesting clownfish facts is that all clownfish begin as males. They will not turn into females until the fish reach maturity. One factor that can determine transitioning into the female sex is if one of the other females leaves the group or dies. If this occurs, the strongest male will become a female and then produce eggs. After the eggs are laid, hatching usually occurs about four or five days later.

The clownfish society works as a hierarchy based. If you imagine the hierarchy as being a ladder, the fish on the top rung of the ladder would be the most dominant and virile fish. The following fish would be the second most dominant and so on, until the least dominant fish stands at the bottom. Although clownfish may travel in groups, these groups are usually on the smaller side which allows them to get along better seeing as the sea anemone cannot tolerate large amounts of fish.

Clownfish really do make wonderful pets as long as you can provide them with the appropriate saltwater environment.