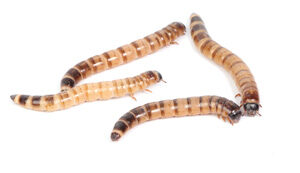 The Art Of Breeding Mealworms

There are several reasons why one might get into the art of breeding mealworms. One might elect to do it as a full time business operation, or as a side business. While breeding mealworms is not all that difficult, in fact is rather straightforward, breeding enough of them to make a business profitable could easily involve a great deal more work than initially anticipated, though once the operation gets under way, the amount of effort required should slack off.

Most of those caught in the act of breeding mealtimes have pets, or are breeding animals such as reptiles. Mealworms are an excellent food source for many creatures, including reptiles, and by breeding one’s own mealworms a great deal of money can often be saved.

In Truth, You’re Breeding Insects – When breeding mealworms, you’ll find yourself dealing with four different creatures, actually the four life cycle stages of the insect (yes, the mealworm is an insect, not a true worm). These four stages are eggs, larvae, pupae, and beetles. Most can deal with eggs and the pupae, but if you’re grossed out by worms or a great number of beetles, breeding mealworms may not by your cup of tea.

When breeding mealworms, you’ll always need to keep a few beetles on hand to lay the eggs that are going to turn into worms. These eggs look like extremely small little beans, and as they are usually laid in a crushed grain or bran bedding, providing both protection and eventually nourishment, the eggs are usually barely visible, if at all. The first sign that something is happening is normally the appearance of tiny worms.

The mealworms will grow in size for a period of roughly three months, during which a majority of them can be harvested for pet food or whatever reason you’re breeding them.  One always needs to save a small percentage of the mealworms as they will, following their final molt, turn into pupae. They remain in this stage of development for only about a week, after which the pupae open up and beetles emerge.

Mealworm breeding involves keeping several containers, as one will always be busy separating the beetles from the mealworms. Once eggs are present in a container, there’s no longer a need to have beetles in the same container unless you want more eggs, but as soon as the eggs begin to hatch the beetles need to be removed, and once the pupae morph into beetles, those beetles need to be given a new home, where they can start the next generation of mealworms. The art of mealworm breeding therefore consists primarily of egg, mealworm, and beetle management, with some attention, but not a lot, being devoted to the pupae, which do not eat much and stay more or less in one location throughout their part of the life cycle.

Breeding Materials – Bran And Vegetables – The material you put in containers can be wheat bran, oats, or some other grain. This serves as both a food source and as bedding for the mealworms. The little creatures also need moisture. A dish of water isn’t going to do the trick, as the mealworms won’t drink water out of a dish, and would drown if they tried. A raw vegetable usually serves adequately as a source of water. A vegetable, the carrot being a good choice will usually last a week or two, especially if the container is covered so it won’t dry out quickly. After a week or two it will need to be replaced with a fresh vegetable. Slice the vegetable so the mealworms won’t have to work through the skin to get at the moisture. They may not succeed.

All you really need for breeding mealworms is two or three containers, bedding, vegetables for moisture, and a starter supply of mealworms. If you raise them in your house, take care so you don’t end up with a beetle infestation. If you do it right, the actual number of beetles you’ll be dealing with an any on time can be fairly small, as the female lays up to 500 eggs at one time.