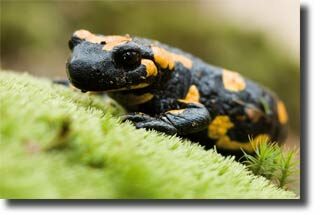 The 4 Stages Of The Salamander Life Cycle

The salamander has an unusual way of reaching adulthood and this is called the salamander life cycle. They are mainly found in Asia, Europe and North America and they are considered amphibians. They live and grow in water until they eventually develop lungs, so that they can start to breathe air. Before that they resemble a polliwog or fish and they even have gills. This creature is known for changing forms while it grows, so that it can go through the salamander life cycle.

Salamanders resemble lizards but they do not have scales. They can reach up to 8 inches at maturity and they have four short legs. They have long tails that they keep from the larvae stage through adulthood and they use it for balance and to grasp objects and climb. They shed their skins as they grow and consume it and there are around 440 different species of salamander.

The difference between a salamander and other animals is, that it begins life in an egg form. These eggs form in the mother’s body. Birds, turtles and some types of snakes also start out this way. The salamander eggs are transparent and they can be observed growing under a microscope. They are placed in water by the mother and each group of eggs are clumped together in a set of 50. They resemble a glob of jelly. After a period of time each egg changes to include a functioning heart, lungs and a tail.

This is the next process of the salamander life cycle and it is described as the newly hatch larva. At this point the creature still has gills but it is able to crawl and breathe on land. It may take awhile to develop legs and depending on the species, it can take anywhere from days to years to grow to full maturity. Sometimes the development of legs has everything to do with losing the gills. When the legs are fully formed in most species of salamanders, the gills disappear. At this point they resemble tadpoles with a snake like body and long tail. During this metamorphosis the skin becomes thicker and skeletal structure, eyelids and the tongue is also formed.

The maturing larva is the next salamander life cycle. It takes a full 2 years for the salamander to reach adulthood and it goes through even more changes. It develops a sex and adjusts to its surroundings and environment. At this time they can also develop a certain color. The colors of the salamander varies and this has everything to do with environment. The colors the creature produces can become a camouflage to avoid certain predators and it can also mimic its natural surroundings.

In some cases, the salamander might not grow to maturity. The water that the creature grows in may become dry or the environment might also become inhospitable, so it may be possible for the salamander to keep some of its larval traits. For example, it may never lose its gills so that it can continue to live in the water if the land surrounding the pond is unlivable. If the environmental problems cease the salamander will continue to grow and go through metamorphosis.

Even when the salamander life cycle is complete it may have difficulties surviving. Pollution, natural predators and unstable conditions can limit just how many salamanders make it to maturity. If there are many frogs and snakes that also occupy a pond, the salamander population can be negatively affected. Things like road construction and land development can also affect the salamander metamorphosis, causing them never to grow to full maturity.