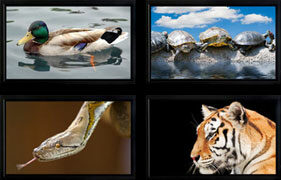 The Interesting Animals website has a ton of useful information on many animals that may interest you. Learn facts about tigers, snakes, ducks, goldfish, alligators, and more!

Did you know that…

• Animal shelters report that more black cats and dogs are euthanized every year than any other color animal.

• The Grass snake is the most numerous of the British snakes. It is also the largest snake found in the British Isles, averaging around 3 feet in length, although  6 foot specimens have been seen, especially in the warmer parts of the country.

• Lack of adequate water and cinch bugs actually go hand in hand. These bugs tend to attack grass that is stressed due to a lack of water, kill the grass, and eventually spread to more healthy grass.

• The comet goldfish is a relatively hardy fish, and can be placed in a pond just as one would do with the much longer living koi.

• Siberian tigers are the largest of all tigers. Their average length is over nine feet long and they weigh over 500 pounds.

• Japanese fighting fish are usually purchased for their beauty, and not for their attitude (they are friendly towards people however, especially the females).

• The largest alligator ever recorded was one from Florida which measured 17 feet 5 inches.

• The lifespan of many tortoise species is about on par with that of a human, although tortoises living well over 100 are not that uncommon.

• Snails can be beneficial in ponds and aquariums as they act as the street sweepers of the community.

• Your chance of being bitten by any of the types of bats is in reality exceedingly slight.

• Ducks who eat bread or crackers on a regular basis have organs which become enlarged and fatty.