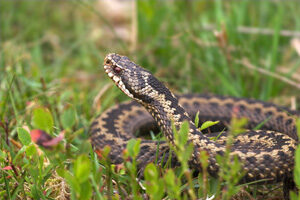 British Snakes – Only Three Major Varieties To Be Found

British snakes, largely because of a cool climate generally inhospitable to reptiles, are limited to three species. Snakes, such as the Grass snake and Adder snake are found throughout much of Great Britain, while the third species, the Smooth Snake, is found only in the southern part of the country where other reptiles are also found.

The Smooth Snake –  The smooth snake is the rarest of the British snakes. Most Britons have never seen one, at least in its native habitat, which is restricted to the south of England, in the vicinity of Dorset, East and West Hampshire, and West Surrey. The female smooth snake can approach 26 inches in length, while the male is almost always less than 2 feet long. The head of the smooth snake is somewhat heart shaped, and the snake is also characterized by a series of dark spots running along its flanks. It lacks ridges or keels on its scales, hence its name. The Smooth snake feeds primarily on other cold blooded creatures, which is probably one reason for its somewhat restricted distribution. Much of Great Britain is too cold for reptiles except for the extreme south where the Smooth snake is found. It will on occasion eat small warm blooded mammals such as mice and shrews. Its bite is non-venomous and it generally kills its prey by seizing it in its jaws and then squeezing the animal to death much like a boa constrictor will do.

Smooth snakes are occasionally mistaken for the venomous adder snake, and occasionally a very large worm is mistaken for a Smooth snake. The snake spends much of its time either underground or hidden in heather, which contributes to the rarity of sightings. The Smooth snake hibernates in the winter months, often in groups, mates in the spring, producing up to a dozen or more young snakes. The Smooth snake is quite long lived, approaching 25 years of age in the wild, and over 30 years in captivity.

Adder Snakes – The Adder snakes are distributed throughout the British Isles, and are the only native snake of Scotland. There are not found in Ireland. St. Patrick may have had something to do with that. While the Adder can approach 3 feet in length, it is generally smaller. They are characterized by a brownish color and a zigzag pattern on the back. The Adder diet is made up of small mammals, and occasionally mammals as large as weasels. Birds also fall prey to the adder on occasion, and it is particularly fond of bird eggs. They are found in a wide variety of habitats, generally prefer dry areas, but will be found along creeks and swamps as long as there is drier land in the vicinity.

Though it is the only one of the British snakes that is venomous, the adder snake is not terribly dangerous in that it is not particularly aggressive, at least towards humans. It prefers to hide (it has amazing camouflage for that purpose), or move away when sensing humans or larger animals. Although its venom is quite toxic, the snake does not deliver a large dose of it when it strikes, and the number of deaths from adder bites is quite low. People who have a hypersensitive reaction to the toxin are the ones at most risk. Adult adders will compete for females by performing what is called an “adder dance”, where they sway rhythmically while attempting to push one another to the ground in the process. The vanquished usually crawls away having become completely exhausted.

Females give live birth in the fall. The young are on their own from the beginning, and also are venomous from day one. Since they are born so late in the year, they often go into winter hibernation before having had their first meal.

The Grass Snake –  The Grass snake is the most numerous of the British snakes. It is also the largest snake found in the British Isles, averaging around 3 feet in length, although  6 foot specimens have been seen, especially in the warmer parts of the country. The Grass snake is non-venomous, and unlike having the boa constructor characteristics of the Smooth snake, simply swallows its prey whole. Unlike the other two species, the Grass snake tends to be more visible, especially during the daylight hours, and can often be seen basking in the sun. While the Adders give live birth, Grass snakes hatch from eggs, as much as 30 to 40 young snakes may hatch form a single cluster. When threatened, the Grass snake will hiss and appear threatening. It will sometimes strike, but with a closed mouth. If all else fails, it will play dead, even to the extent of becoming quite limp, opening its mouth, and allowing its tongue to hang out. Quite an actor.