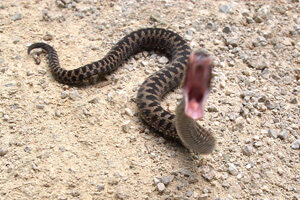 Black Mamba- The Fastest Snake In The World

The black mamba can be found all over South Africa and Somalia. They are feared all over the African continent but there are a few myths associated with this creature. Although they are very fast and can move along at a speed of twelve miles an hour, they cannot chase a person for several miles. They are also not capable of killing many people at a time and they do not attack unless they are provoked. They are aggressive when it comes to feeding but just like any other snake, if the black mamba is frightened it will retreat to a safe place and hide.

Along with being the fastest snake the black mamba is also called Dendroaspis, which means that the snake is a tree dweller. They are slim and strong and can grow up to nine feet long. But there have been black mamba’s that have reached fourteen feet long and this is a very rare occurrence.

Even though these creatures are referred to as the black mamba, they are actually a light green or gray color and they darken as they mature and reach adulthood. This is confusing to most people and it makes the black mamba hard to identify. The snake does not appear dangerous in anyway. It looks like an everyday snake you could find in the garden and it has no distinctive scary features like other snakes, such as the cobra. But it does have a jet black mouth. This is probably the main reason for the name, the black mamba. You are unlikely to even know it is a black mamba until it opens it’s mouth and  shows the teeth and this is what it does before it is about to attack prey.

The bite of a black mamba can be fatal if the anti venom is not given to a patient quickly after being bitten. It can kill a person in a matter of hours. The venom of the black mamba works to paralyze the prey. The venom freezes up the lungs and all other functioning and the prey usually dies of suffocation. After it bites, the snake goes away and waits for the prey to be affected by the venom. When paralysis has overtaken the prey, the black mamba will move in and devour it. The snake mainly consumes small rodents and squirrels but on occasions it will eat a bird. It has a smaller jaw line but it can adjust the jaw and stretch it to consume food.

The black mamba usually lives in his own liar. He will live in it for a long period of time if he is undisturbed. These snakes also like to be in the sun. They may choose a place to enjoy the sunlight and return there everyday.

The black mamba has a bad reputation that it does not deserve. It is not overly aggressive and it acts just like any other typical snake in the wild. The only way it differs, is that it has venom that can easily kill. If you do ever encounter a black mamba, it will probably exhibit the fastest snake in the world behavior and retreat to a safer place. In fact, it is a very rare occurrence to be bitten by a black mamba snake.