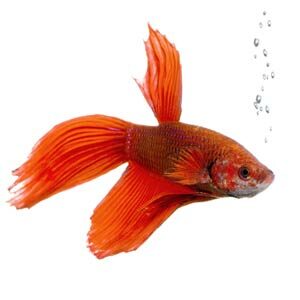 While they may be known by other names such as Bettas or Siamese, the Chinese Fighting Fish are most widely known by their beauty rather than their names.   They are often chosen above all other fish as pets due to their appearance and the fact that they are inexpensive to keep.

The small Betta is often seen displayed in pet stores and department stores in very small containers such as cups or even closed plastic bags.  One must wonder when seeing these how the little fish can possibly survive in such “homes”.  The fact is that, unlike most varieties of fish, bettas are members of a small group of fish called anabantoids, or fish with the ability to breathe air.  They do so through the means of an organ similar to a lung.  While many fish absorb the oxygen they require through the intake of water into their bodies, fish belonging to the group of anabantoids take in the oxygen directly from the air.  When inhaled, the air circulates through their bodies via the bloodstream.  This ability provides anabantoids such as the Chinese fighting fish or bettas the opportunity to remain alive for short periods out of the water.

While anabantoids are equipped with the lung like organ to breathe oxygen, they are not so equipped immediately after hatching from the egg.  Rather, it is a feature the fish must develop over time as it matures.  As fry, bettas must use their gills totally to receive the oxygen they need until such time their lung develops.

There can be no doubt that the betta fish is a lovely specimen.  In the wild, betta fish can be found in Thailand and Cambodia.  In the United States, it can be considered as one of the most popular aquarium fish.  This status can be attributed to its jewel toned coloring; a result of selective breeding.  The colors can be just about any color of the rainbow, with several different colors often resplendently displayed on just one fish.  The male of the species is often more brightly hued than the female, as is common in the wild.  These iridescent aquatic jewels are made even more beautiful by the adornment of feathery fins which swirl and wave gracefully in the water.

As an aquarium fish, the Chinese fighting fish must be kept separate from others of its kind.  It can be housed in the same container as other varieties of fish, however.  Even a mating pair must be parted quickly after mating in order for the female and the offspring to survive.  In the wild, the male attracts his selected female through the building of a “bubble” nest, which is simply a bubble at the water’s surface.  The female, greatly impressed by the bubble, will lay eggs that the male will fertilize.  The male then places the eggs within the bubble and chases away the female, who will often consume the eggs.   The male has also been known to snack on a few of them himself, but mostly will protect them until the fry emerge from the eggs after 3 to 4 days.  As the baby fish mature and the lungs develop, periods of aggression will be observed; a sign that the time has arrived to separate the fish.

Bettas are ideal for those in apartments.  Equipment such as aquarium tanks, pumps and plants are unnecessary; a simple glass container will suffice.  Food is commercially available as Betta Food, and meat is enjoyed occasionally by the carnivorous fish.

The Chinese fighting fish make a fascinating and attractive addition to a home.  Viewing fish is considered to have a calming and relaxing effect as well, making them an ideal and popular choice as a pet.