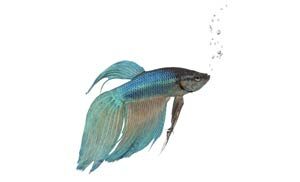 Putting two male Japanese fighting fish in the same bowl is about as humane as a cock fight, or training dogs to fight one another. After a brief period of time their will be only one fighting fish left. Most people do this by mistake, thinking their solitary fish might enjoy company. Putting a male and female in the same tank is OK although an occasional fight may break out around mating time. Sometimes you can get away with putting another species of fish in the same tank, but generally speaking, it’s best to let the male fighting fish lead a solitary existence.

Japanese fighting fish are usually purchased for their beauty, and not for their attitude (they are friendly towards people however, especially the females). You can find the species in almost any color of the rainbow. Most varieties are of a solid color but some are bi-colored or exhibit patterns of colors. Some species are translucent (cellophane) and others are albino. Iridescent blues and blacks are among the favorites. As they seldom grow to a length in excess of three inches, they can be kept for fairly long periods of time in small containers, as decorations. Shier natural habitat is very shallow and stagnant water, a little like a mud puddle. In that sense they are rather easy keepers. You don’t have to invest in a 55 gallon aquarium complete with a pump, aerator, and filtration system to keep your fish happy. In fact, too much moving water, especially violently moving water, can actually be harmful to this fish, which in spite of its reputation as a fighter, is a bit on the fragile side.

Some colors are more rare than others, and depending upon how much effort has gone into breeding a particular strain of Japanese fighting fish, the cost of one can vary significantly. Generally you can find a very attractive little specimen in the $3.50 to $7.00 range. A native of Thailand and other Southeast Asian countries, the fighting fish was introduced to Europe in the 19th century and to the United States early in the 20th. Not only are their demands not great as far as the amount and quality of water they require, they are also easy keepers as far as feeding is concerned. Freeze dried food, such as brine shrimp, is good as a staple. They also have a preference for blood worms. Many fish owners keep the amount of live food to a minimum to lessen the chance of their pets becoming infected with parasites. The fighting fish can go nearly a week without food, although most recommend that 4 days without food should be the maximum. A once a day feeding on the other hand is almost a little too much for the fish. Feeding every other day seems to be about right.

One important tip in the care of the Japanese fighting fish is not to put a reflective object near its bowl or aquarium permanently. If the fish sees its reflection, it will flare (extending its gills and fins out, to appear larger), become very agitated, and try to attack the reflection. You can get this reaction by holding a mirror to the tank although it’s advised that this not be done for more than a minute or so and not too frequently, as too much of it is not good for the fish. Some fighting fish owners hold up a mirror for a minute or so once a day to give the fish a little exercise. Whether this benefits the fish or not, probably only the fish knows for certain. You can put a small aquatic plant in with the fish if you want to. It will probably eat it, or at least nibble at it. For this season, don’t put an artificial plant in the water or your fish will eventually have a tummy full of plastic pieces.

As we have said, you can but a male and female in the same container and generally all will go smoothly. Two or more females can also be kept together as they do not tend to fight one another. This is not seen too often simply because the females are much less colorful than the males and are usually kept mainly for breeding purposes.

Because of its beauty, easy care and occasional fighting spirit, the Japanese fighting fish has become a favorite among fish hobbyists in this country.