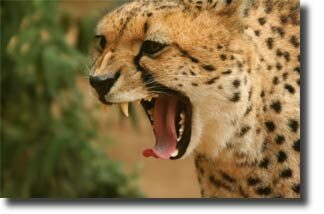 What Do Cheetahs Eat?

Many who are interested in learning more about wild animals ask the question what do cheetahs eat? Cheetahs, which are the fastest land animals in the world, have a very different method of hunting. Because of their lightening fast speed, they do not hunt the same way as other animals, such as lions and tigers.

While other large cats will stalk and ambush their prey, the cheetah has no need to do that. Thanks to his speed, he is able to walk right up to his prey. When he gets about 100 or so meters away from his intended victim, he will then run his fastest towards it.

Happily for his prey, many are able to use that head start to get away. The answer to the question what do cheetahs eat is mainly gazelles. While these creatures are not as speedy as a cheetah, they can reach speeds up of up to 50 miles per hour.  While that does allow many to make their escape, since the cheetah can reach speeds of up to 70 miles an hour, many of these gazelles and other small animals do in fact become dinner for the cheetah.

In addition to gazelles, cheetahs also eat rabbits, birds and warthogs. Sometimes, a cheetah will eat the young of a larger animals, such as a wildebeest.

Cheetahs are carnivores, so when asking what do cheetahs eat, the answer will not usually include vegetables or other plant matter. These are not terribly large animals. The average cheetah only weighs about 85 pounds. They eat about six to nine pounds of meat per day.

It is also interesting to note that cheetahs do not eat every day. Instead, they will hunt for food every few days. Once they get a good meal, they can go without eating for three to five days. They will only hunt when they are hungry.

Unlike cheetahs in the wild, captive cheetahs are usually fed each day. They typically are fed a diet of ground meat along with soft bones.

While cheetahs are, as mentioned earlier, carnivores, some cheetahs in captivity do enjoy occasional treats of fruit such as watermelon and cantaloupe.

Now that the question what do cheetahs eat has been answered, let’s take a look at what eats the cheetah.

One reason that the population of cheetahs continues to be in decline is because only about 10% of cubs in the wild ever grow to adulthood. They are sought by many predators including lions, tigers, hyenas and birds of prey.

Adult cheetahs sometimes become prey to other animals but, sadly, their biggest threat is from humans. Sometimes this threat is in the form of hunting, although this is illegal now since cheetahs are endangered. Other danger is from loss of habitat.

Cheetahs are beautiful animals that must be protected. They are an important part of the food chain and it is the responsibility of humans to do whatever can be done to make sure this species survives.