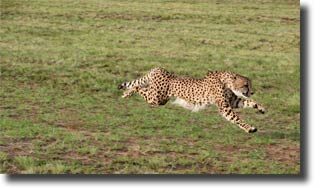 If your answer to “Where do cheetahs live?” is Africa, you’re correct, or at least 95% correct. Most of these beautiful and extremely fast cats live in Africa, though a few have been reported in parts of the Middle East (Iran specifically) and Asia. 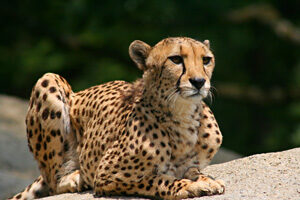 Central And Southern Africa Is Home To Most – Most of the cheetahs living today are found in the sub-Saharan region of Africa, roughly south of a line running from Senegal on Africa’s west coast to Somalia on the east coast. The bulk of the cheetah population lives in southern Africa, particularly South Africa, Zimbabwe, and Namibia. Sightings of the cheetah have been reported in some northern African countries such as Algeria, but these sightings have generally been quite rare. Of the two dozen or so African countries the cheetah can call home, the country with the greatest number is Namibia.  Namibia is also the location of the Cheetah Conservation Fund. The cheetah is an endangered species, and the Fund has been very active the past two decades in taking steps to protect the animal wherever it may be located.

Wide Open Space With A Bush To Hide Behind – Another way to answer the question “Where do cheetahs live?” would be to look at the individual cheetah and see where it’s most at home, since it of course does not care about political boundaries. The cheetah prefers brushy to open terrain, brushy to remain hidden while on the hunt, and open to give chase. You generally won’t find cheetah populations in heavily forested areas. They need the open areas to chase down their prey, which are primarily hoofed animals, Thompson’s gazelle being a favorite source of food. They would also prefer a habitat where they don’t have competition for food, though are not always successful in finding such an area.

A Large Area In Which To Roam – The female cheetah is somewhat of a loner, and has little to do with other cheetahs, especially other females. She of course will approach a male for mating, but her day to day life is usually a solitary one. A female’s range, referred to as her home range, typically covers between 20 and 30 square miles of territory. The male’s territory is often much larger as the male seeks out more than one female. The male tends to travel in small groups of males, called coalitions. The range of the cheetah is very dependent upon the terrain as well as the source of food. In Namibia for example, the range of a single cheetah can cover several hundred square miles of more or less open terrain.

Open Country Is Best – If the answer to where do cheetahs live seems to cover an excessive amount of acreage, one reason is that, once the cheetah has made a kill, it usually must dine on its prey right away before another competitor, such as a lion or hyena, comes along. The cheetah is not well equipped for fighting. Its speed is its best defense, and it will usually abandon its meal if another big cat or predator comes on the scene. Complicating things even more, running at 70 miles and hour for 1500 feet or so, rapidly tires the cheetah out, and often it must rest before devouring its prey. This gives another predator time to claim the kill and chase the cheetah away. The cheetah is one of the few members of the cat family which does not climb well, so it can’t simply scamper up a tree to safety. The cheetah in fact, immediately following a chase, is rather vulnerable. The cheetah then, likes rather open country where it cannot only spot prey but avoid its own predators.

The cheetah then, will continue its existence in somewhat isolated pockets in Africa. It is most apt to survive in the various national parks, or those areas where the Conservation Fund is most active. A small population if the Asiatic subspecies has protected status in Iran, and efforts are underway to reintroduce the animal in India, where it once roamed, but became extinct. Hopefully, the answer to “Where do cheetahs live?” will never be allowed to become “Nowhere”.