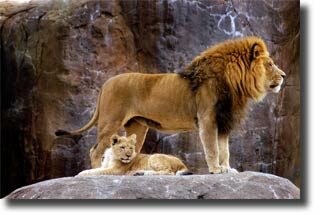 The Barbary lion is accepted throughout the world as the biggest lion that exists.  This animal can reach a weight of approximately 630 pounds.  This is about 200 pounds lighter than the African lion.  According to research, this lion is actually extinct in the world and its ancestors are held in captivity in places such as zoos.  Understanding lions and facts that surround them can make you appreciate the biggest lion even more.  Some are cute and some look down right mean, but they all have similar behaviors and characteristics that you may enjoy reading about.

The Barbary lion was once found in North Africa.  Research has shown that in the Middle Ages these lions were actually kept at the Tower of London.  Now there are several attempts to reproduce this animal through DNA studies.  Scientists have actually collected bone samples from different museums across the globe in order to examine the DNA of this lion so that they can begin to breed different lions that are similar to the Barbary in order to get a close genetic match to this extinct creature.  This is called the Barbary lion project.

Lions will often live in what are called prides.  These are groups of lions that may consist of anywhere from three to thirty lions.  The biggest lion is no exception as it will live with a pride as well.  The vast majority of the lions within the pride are females and they will ultimately mate with one dominant male within the group.  Along with the mating duties of the male lion, they have other jobs as well.  He is going to keep other males from coming into the pride and he is going to baby-sit the cubs while the mother lion is out getting food.  He is also going to fulfill his parental role by making sure that each cub is getting enough to eat at each meal.

Another interesting fact about lions is that any female that is producing milk will allow any cub to nurse off of her.  This does not have to be her cub.  Maybe this is because every female that lives in the pride is actually related to one another.  Do you think they know that?  Lions can run up to 50 miles per hour and they sleep for almost twenty hours a day.  The sleeping patterns may be very similar to the cat family but there are some things that make them different from other cats.  For example, male lions are the only members of the cat family that have a mane around their face and all lions are the only cats that have tufts at the end of their tails.  These same characteristics could have been seen with the biggest lion.

The biggest lion is an animal that has a very long history and a lot of very unique characteristics.  They can be loved and adored from afar but it is not recommended that you get to close to one.  While they may simply look like big cats, the size of the biggest lion shows that they are more than a lovable pet.  It takes a lot of studying and understanding to be able to relate to these beasts in a manner that is safe.  Even though they may appear somewhat socialized at the zoo, they still have some of the wild in them.  Maybe that is what is so fascinating about them.  You can always research these large cats and learn more about them.  You may even want to follow the Barbary Lion Project in order to see how that is going and if a new lion will ever be released into the wild.  After all, that is the goal.