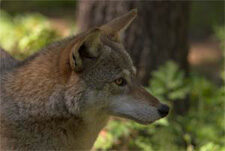 Why You Should Never Keep A Pet Coyote

There are plenty of things to think about if you are planning on having a pet coyote. The first would be, that you may not even be able to keep one. In some states it is illegal to keep coyotes or wolves as pets and if you do you can be heavily fined or even arrested. Before you even consider keeping a pet coyote, check the laws in your state.

The prairie wolf or coyote can be found anywhere from Alaska to South America. Their ability to adapt in places that are frequented by humans makes them better able to cope than a wolf. They are multicolored and this can depend on where the live. In warmer climates the coyote is more of a yellowish color and in cooler climates their fur is considerably darker. They have puffs of white color on the chest area and reddish brown tips on the paws, the muzzle and on the head. They are beautiful creatures that resemble a mix of a dog and a wolf.

The average coyote can reach thirty four inches long when they are fully matured and can stand up to twenty six inches in height. The average weight for a normal coyote is around fifty pounds. It can run at a rate of forty three miles per hour and have they have been known to jump or leap a full thirteen feet.

Coyotes live and thrive in packs and they are nocturnal. They were at one time diurnal but they learned to be awake and aware at night to avoid human contact. They mate once a year between January and March. The female will come into heat for a two week period during this time and they usually keep the same partners year after year. They have a distinctive quality that sets them apart from dogs. They will howl and yip to communicate with each other. Every sound means something different to the coyote but most of the time howling occurs during mating season.

Because the coyote is not domesticated, it isn’t a good idea to keep a pet coyote. They have instincts that make them dangerous. But people normally do not come in contact with full grown coyotes. For example, if the parents of the coyote have been killed, you may be able to go near or touch an orphaned baby. This is usually how people get the idea to raise a pet coyote.

Baby coyotes are docile. They may act exactly like a puppy and can seem playful and happy. But as they start to mature, instincts can kick in and they may start to act in an aggressive manner. This is because they are not used to being indoors or caged. They will start to act anxiously and they may even pace back and fourth in front of a door or window.

A pet coyote can harm or even kill a family pet. Instinctively in the wild coyotes go after small rodents, squirrels and anything else they can catch and eat. If they are allowed to go outside they will hunt down and kill a cat or other small dog that crosses their path. This can also be a problem if the coyote owner has neighbors with smaller animals or live stock. Since coyotes do not like to be caged and need a very large area to run and thrive, it is a bad idea to keep them as pets.

When people do attempt to keep a pet coyote who does not have enough room to roam, the results can be disastrous. They become aggressive and unsafe to be around.