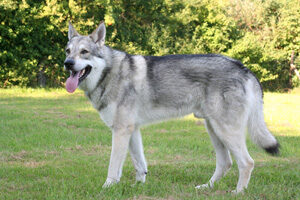 Some Interesting Facts About the Saarloos Wolfhound

The Saarloos Wolfhound, also called a wolfhound, received its name after a Dutch dog breeder by the name of Leendert Saarloos.  He is contributed with developing this breed of dog in the Netherlands.  His work was started in 1920 as he crossed a German Shepherd dog with a wolf.  By doing this, he was able to produce a total of 20 wolf dog hybrids.  While this may have been exciting, it was found that these dogs were very shy and almost afraid of people.  Because of this, they did not train very well and they were not considered to be very good work dogs.  They were not very good guard dogs either because they did not really bark if there was an intruder.  In 1969 Saarloos passed away.  There may have been a fear that the Saarloos Wolfhound would disappear and become extinct.  However, in 1975 the Dutch Canine Authorities made the Saarloos Wolfhound a real breed of dogs and saved it from becoming extinct.

These dogs have been used as guide dogs for the blind as well as for rescue dogs.  This does seem like a good fit for this dog as they are very sensitive to body language.  Today, these dogs will often vary in their height from 24 to approximately 30 inches.  They also weigh anywhere from 80-90 pounds.  The muzzle of the dog is wide and its ears are erect.  The fur of the dog is short and very dense and this helps it when it is in cold weather.  The color is either gray or brown and it will generally have white markings.  The eyes of the dog are almond shape and they are brown in color.  The body has good muscle tone and it is rather compact.  The Saarloos Wolfhound has a long bushy tail as well.

The Saarloos Wolfhound is a good fit for someone who has a lot of experience with dogs.  They are needy in the sense that they need a lot of exercise and they do not seem to get tired very easily.  It is not recommended that you have a do like this if you live in the city or in an apartment complex where the dog will spend most of it’s time indoors.  It is important to remember that this dog does have wolf characteristics.  It has a tendency to want to be with a pack and it needs a lot of space in order to roam.  However, it is a very loyal dog and it will take well with certain people, especially its master.  It is also a good idea to introduce a pup to new people or owners when they are young.  It is recommended that this be done around 10 weeks. The life expectancy of the Saarloos Wolfhound is anywhere from 10 to 12 years.

The dog has a strong personality and it does not train well when looking at obedience. It does well in cold climates and it does best if it can live outdoors.  It is not recommended that you have a Saarloos Wolfhound if you have children or other animals in your home unless they have been a part of your family since the dog was introduced.  By doing it this way the dog may see the child or other animal as part of their pack and they will adjust well to them.   You need to remember that this dog is part wolf and it does have a killing instinct so you will not want to have rabbits or small rodents around the dog.