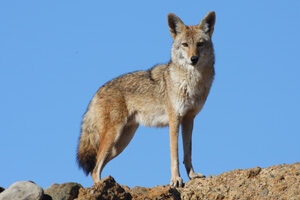 If you live in a state where coyotes are common and you are a pet owner, it would be essential to find an effective coyote deterrent.  Sadly, thousands of cats, dogs, and other pets are killed by coyotes every year.  Most people remember the heartbreaking story when Jessica Simpson took her beloved dog Daisy for a walk at dusk but without her on a leash, before anyone could react a coyote grabbed the dog, which was never seen again.  These stories are horrific but sadly, all too common.

Typically, wild coyotes do not attack humans but they can sometimes show signs of aggression.  For instance, if a mother coyote has pups nearby, she would have no problem in bearing her teeth to warn anyone to stay away.  Adults would know to provide her with space and then use an effective coyote deterrent but if when there are small children involved, the situation becomes quite serious.

With it being illegal to trap or kill coyotes, the only viable solution would be in choosing an effective coyote deterrent.  In most cases, once the coyote realizes he or she is no longer welcomed, the animal would move on but in rare cases, the coyote would stand ground while being determined to stay.  If you are facing this situation, it may be necessary to contact your local Wildlife, Game, and Conservation Department to ask about possible solutions for getting the animal off the property permanently.

Interestingly, one of the more effective options for a coyote deterrent is noise.  Although you could place a radio or stereo system where loud music could be placed, you have a few better options.  Today, a number of companies have actually developed CDs that have proven to working amazingly well.  With this, sounds of predators of the coyote are played such as the cougar.  Most CDs include low and high volume growls and hissing sounds of real cougars that have been digitally enhanced to sound realistic to the coyote.

In addition to cougar sounds, often lights that come on via a motion sensor work great.  For this, coyote deterrent, it would be important to have the system far enough away from the house so the coyote does not feel comfortable in getting too close and that illumination is as bright and broad as possible.  That way, if more than one coyote were approaching, the light would scare all the animals away.

Keep in mind that coyotes not only love meat, they enjoy fresh fruit.  Therefore, if you have any fruit trees on your property, you would need to make an effort to keep anything that has fall on the ground picked up.  Additionally, make sure that no potential food is accidentally left out that would entice coyotes.  Sometimes, people overlook fish in a pond, dog, or cat food on a patio or deck, and gardens.  Some people swear a great coyote deterrent for this situation is to place human hair or mothballs around the perimeter of the property.

Of course, the best way of protecting your animals is to keep them inside.  Then, if you want to walk your dog, even a larger size animal, do so in a populated area during mid day.  Coyotes prefer hunting during the cooler hours of the morning and evening so avoid these times.  Then, make sure your dog is on a leash at all times.  As in the case of Daisy, the coyote had snatched the dog so fast that there was no time to react.  In addition, you might consider any one of the coyote deterrent options that people have used: