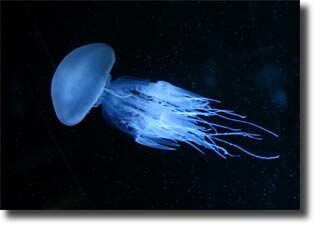 There are literally hundreds of species of jellyfish, so the jellyfish habitat can be found in virtually every ocean on the planet. The specific living conditions for any jellyfish species depend on the particular type of jellyfish, but the bottom line is that they have to live in a salt water environment. There is one rare and distant relative of the jellyfish that can live in fresh water, but in general all jellyfish live in the ocean.

The largest and most common jellyfish habitat is basically the open ocean. There are species of jellyfish living in every one of the world’s oceans. Some species thrive in the more tropical climates where the water is almost always warm, but there are other types of jellyfish that prefer the icy cold waters of the arctic or Antarctic climates.

It is not just temperature that decides the jellyfish habitat. Jellyfish species can be found at different depths throughout their ocean homes. Some prefer to coast along in the open ocean, other species dwell along the coastlines of the world, and still other types of jellyfish loom in the deepest, darkest depths of the ocean.

Jellyfish Species and Their Habitats
Jellyfish species vary in greatly in appearance and size, and sometimes this fact is what dictates the type of habitat a jellyfish prefers. Smaller species of jellyfish are almost always found closer to the shore – near beaches and in harbors – in water that is not very deep. These species include the blue blubber jellyfish, the lagoon jellyfish and the mangrove jellyfish, who stay close to the surface of the water in order to enhance their symbiotic relationship with certain types of algae.

Some species of jellyfish are better swimmers than others, possessing a superb ability to thrust themselves upward in the water. These jellyfish are most likely to live in middle depths of the ocean where they can burst quickly to the water’s surface and then return to deeper waters. One of the most common mid-depth species of jellyfish is the Portuguese Man o’War, also known as the blue bubble or blue bottle jellyfish.

Jellyfish from the cnidarians and ctenophore groups are the species most frequently found in the deepest ocean depths. Because of their largely inaccessible habitat, deep ocean jellyfish species are full of mystery and are rarely seen by the average person.

Other jellyfish species that hardly ever come in contact with humans are the lion’s main jellyfish, also knows and the winter jelly. These are the hardy species that make their home in the coldest waters on the planet, in the Antarctic and artic regions.

Interesting Jellyfish Facts
Jellyfish are a unique species, especially with their sometimes see-through appearance. It is thought that jellyfish have been around for over 650 million years, which means they were likely swimming the planet’s oceans before the dinosaurs even came about.

The box jellyfish is responsible for more human deaths every year than any other marine animal.

The largest known species of jellyfish can have a body that grows up to 8-feet long, with tentacles that reach a length equal to half a football field.

Some think that the jellyfish could help eliminate world hunger, because some species could be used as a source of protein.