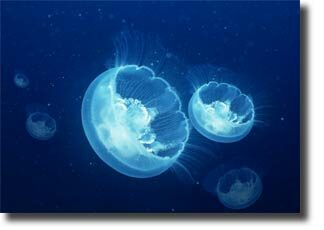 The Different Types of Jellyfish

There are several different types of jellyfish that people should be aware of.  This is very important if you are going on vacation and you are worried about running into them.  It is also interesting to know about them if you live in an area that is frequented by jellyfish.  This article will explain a few different types of jellyfish if you are interested in learning about them.

The cannonball jellyfish can also be called the cabbage head jellyfish.  They are generally harmless and they will often wash up on beaches.  It may reach sizes that are approximately 7 inches in diameter.  It is not usually harmful if you simply brush up against in the water.  It is actually edible and in Japan it is often enjoyed.  They are usually dried before they are eaten and you do not want to eat the ones that have washed up on the beach.

The moon jellyfish can often be found in large numbers when it is found.  Some people report that you have to be very sensitive in order to feel its sting if it does touch you.  They can also be approximately seven inches in diameter just like the cannonball jellyfish.  Next is the sea nettle jellyfish.  This can be approximately one foot in diameter and unlike the other jellyfishes just discussed, it can hurt you very badly if you are stung by it.

The box jellyfish is also very painful if it stings you.  Actually, some of the box jellyfish found in Australia can kill you if they sting you.  However, the most dangerous jellyfish is the Portuguese man of war.  This jellyfish can often be seen floating on top of the water and it looks like a balloon.  Its tentacles can hang roughly 50 to 200 feet beneath the water.  These are typically found along the lower east coast of Florida and they are often blown up on shore if the winds are strong.  If you are stung by one of these (or any of the types of jellyfish) you may be able to get the sting out by pouring vinegar over the site.  However, be sure to remove any tentacles that are still on you before you apply any of the vinegar.  You can remove them safely by using a credit card or a pile of sand.  You do not want to touch it because you do not want to be stung again.

The blue button jellyfish and they are also considered to be harmless to people that touch them. Although there have been reports that their tentacles will come off and stick on you if you pick on up.  Comb jellyfish do not sting either.  So, as you can see, not all jellyfish are harmful.  It is just important to know which ones are and which ones are not.

The different types of jellyfish can be very fun to study.  The important thing to remember is that if you are stung by one you will most likely not know which type it was.  You should also watch the lifeguards on the beach.  They are going to know if there are predators in the water and they are also going to know which types of jellyfish frequent the area you are in.  You should also be prepared and have an understanding of what you should do if you are stung by a jellyfish.  You can also ask locals if they have a problem with jellyfish in their area.  They are going to be able to give you an idea of what to look for.  Asking them what you should do in case of a sting may also be a good idea.  Because a sting can be very painful, you are going to want to know how to treat this attack.