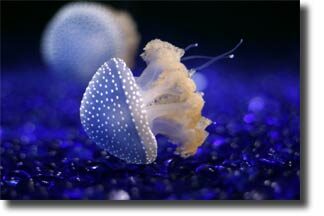 What Do Jellyfish Eat?

If you ever are stung by a jellyfish, you will probably wonder “what do jellyfish eat” that makes them so strong? A jellyfish is anything but a defenseless little blob. After all, jellyfish paralyze their prey and then eat them through an opening in their stomachs. They produce venom which is released from stingers that are positioned in their tentacles.

Jellyfish actually have a big hollow cavity right in the middle of their body. This serves as their stomach and intestine. They belong to the Coelenterada family, and the name means hollow intestine. The tentacles on the jellyfish pulsate, incapacitate the prey with venom, and then draw the food and water into the hollow opening.

What do jellyfish eat? Thankfully, they only eat crustaceans and plankton. But there are several creatures that eat jellyfish, and these include sea turtles, sunfish and spade fish. In the Asian culture there are even several recipes where jellyfish are eaten by humans.

One of the least known facts about jellyfish is that they have two body forms. The first is known as the polyp stage, which forms when sperm and egg get together. The polyp is not free swimming. Right before summer arrives, the polyp sheds off parts of its body and these each grow into one jellyfish.

If you want to get right down to it, jellyfish are not fish. They are invertebrates because they do not have a spine. They are also 95% water which is pretty amazing when you learn that some jellyfish grow to very large sizes. For instance, the jellyfish known as the Sea Blubber is between six and seven feet in diameter and its tentacles are a scary thirty to forty feet long. Luckily that is the largest a jellyfish gets.

The Many-Tentacled Jellyfish is much smaller in size but it has one hundred tentacles. The Portuguese Man-of-War has tentacles that are forty feet long and can paralyze a very large fish. If you should get stung by one of these large jellyfish, the first thing to do is to remove the tentacles from your skin. As long as they are in you, they will continue to release venom. Some of these jellyfish cause more than pain. They can cause you to go into shock. If you are stung by a large jellyfish, seek immediate medical attention. Humans may not be the answer to the question, “what do jellyfish eat,” but they can still suffer much from these jelly-like blobs.

Jellyfish live in the ocean, but the currents are often so strong that they are taken into bays that are normally sheltered. They can move up and down in the water by contracting muscles but they have no ability to propel themselves forward in the water.

There is one exception, and this is the four-sided box jellyfish, who is a very good swimmer. He is also the most dangerous to humans of all marine animals. The box jellyfish lives in Northern Australian waters, and each of the four corners of its box have up to fifteen tentacles. This jellyfish sits and waits for its prey to bump into it and this is usually the case with humans. It can move speedily, however, by filling its box with water and then forcing the water back out. Their tentacles have millions of stingers and they drag these tentacles along behind them when they swim. When a human touches the tentacles, all of these stingers which are filled with venom, attach themselves to his or her body.