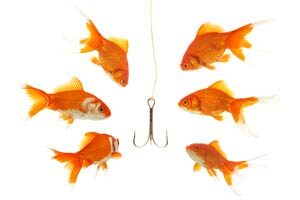 A Guide to Diagnosing and Treating Goldfish Ailments

Goldfish are one of the most popular aquarium fishes, especially as a first fish for children, but goldfish ailments are numerous. Goldfish are far from carefree but there are successful treatments for most goldfish ailments. You should start out by doing a little research on goldfish diseases so you know what symptoms to look for in a sick fish, and what sort of supplies you should keep on hand to treat your fish. You should buy a second tank that can be used for any sick fish, and to quarantine new fish for two weeks before placing them in the community tank.

In order to keep your fish healthy, it is necessary to observe them carefully each day. If there is a problem, the quicker it is diagnosed, the better the chance of the goldfish surviving the incident. Watch the fish so you can tell if its behavior is looking normal or not. Symptoms of goldfish ailments include hiding behind objects, damaged fins, gasping for air, spots on the skin, shaking, extra cloudy water, and any blood or bumps, among others.

You should always have a hospital tank ready to go just in case you have a sick fish. Everything has to be exactly the same as in the original tank so that the fish does not get sicker. Some goldfish ailments are contagious so the separation can keep the other fish from getting ill. The fish needs to be well for several days before returning it to a tank with other fish.

Let’s take a look at a few of the illnesses which affect goldfish:

Ich or Ick–short for ichtyopthirius, is a very frequent illness among goldfish. This is a parasitic illness and you can see the parasites on the skin of the fish. They look like teensy white spots. These parasites feed off of your fish and they reproduce on the bottom of the tank. Having dirty water is one of the causes. Ich is easily gotten under control with medicine which comes in tablets, drops and gels. Aquarium salt can also get rid of this condition.

Lice–Goldfish can get lice, and these can kill a fish if the situation is not taken care of immediately. Lice look like little green specks on the outside of the fish. You need to remove the parasites from the fish and then treat the tank with medication.

Fin Rot–This comes from a fungal or bacterial infection. The symptoms are fins which start to look ragged with a white hazy surface. Factors influencing this disease are stress, too many fish in the aquarium, not enough oxygen, too much handling, or dirty water. If left unchecked and fin rot reaches the body of the fish, the fish will not survive. Fin rot can be treated successfully with malachite green, a toxic dye.

Goldfish Bladder Disease–A goldfish floating on the top or bottom of the tank is not necessarily dead as many people think. It can have goldfish bladder disease. That’s when the fish swells and loses buoyancy because of gas. The cure is usually not feeding the fish for a few days and then beginning with a diet of green leafy vegetables and peas.

Dropsy–one of the nastiest goldfish ailments, this is a bacterial infection which begins internally and then moves toward the outside. Dropsy has symptoms of bloating, bulging eyes and scale changes. The disease must be treated early on or it will be terminal.

Goldfish contract these and several other illnesses. Just about all of them can be treated successfully if they are treated in time. That’s why it is important to watch your goldfish every day so you can notice right away if anything is going wrong.