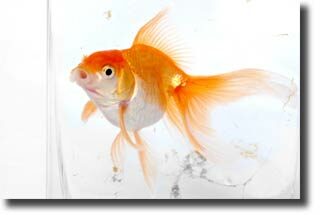 How To Spot And Help A Sick Goldfish

Depending upon the symptoms it exhibits, a sick goldfish may have something quite minor, requiring only cleaning up its environment, or something quite serious, for which nothing much can be done. Whether you have a single goldfish or many, it pays to keep watch to see that normal behavior is evident on a daily basis. Neglect can become a leading cause of health problems with your fish.

It almost seems like a no-brainer, but most goldfish diseases can be prevented through proper care, and having a seriously sick goldfish can often be avoided by nipping a growing problem in the bud. It all depends of course on the nature of the disease. A solitary goldfish, or a pair, is unlikely to become sick when given proper attention. The more fish you have of course, the more likely a problem is to arise, with one fish or many. Here are several of the more common problems fish can encounter, together with causes, when known.

Some goldfish types are more prone to certain sicknesses than others. A common sickness affecting goldfish with a globoid body shape is swim bladder sickness. Because of the anatomy of the fish, it is more apt to have “mechanical” problems with the organs that regulate its buoyancy, and it ends up floating on the surface. Overfeeding which results in a clogging of the digestive tract, is probably the main cause of swim bladder problems. The problem can sometimes be cured by placing the fish in clean water, isolating it from other fish, and cutting way down on feeding for a brief time.

Where a goldfish floating on the surface may sometimes respond to treatment, such as mentioned above, one hugging the bottom, and basically not moving around at all, is probably a goldfish that is very near death. There can be a number of factors involved, but water quality issues seem to be the major cause. Cleaning up the fish’s environment may help, but by the time a fish has “crashed to the bottom” so to speak, it is usually too little too late. A fish that is not eating is also a very ill fish. This can also arise from a number of different causes, but frequently the presence of bacteria or parasites are the cause. It may be helpful to add some salt to the water (solar salt is good; sea salt is not very good). About one teaspoonful per gallon is a suggested amount. Though the goldfish is a freshwater fish, it can tolerate a small amount of salt in the water. The salt helps get rid of parasites, and certain problem-causing bacteria.

Parasites are behind a number of reasons for having a sick goldfish on your hands. The presence of white spots, known as “Ich” is probably the most commonly observed parasitic condition. Ich is treatable by a special medication. Parasitic and fungal conditions are often treatable, although more serious conditions such as fin rot can be difficult to treat. At the risk of beating a dead horse, prevention is the best approach, but another idea to keep sick goldfish problems to a minimum is to purchase a book on goldfish diseases. Here you are more apt to find specific instructions on what to do in those cases where medication of one type or another is called for. In summary, the three things providing a firm foundation for healthy fish are, a clean environment, monitoring the fish’s behavior, and gathering information on spotting and treating whatever diseases or illnesses may come along.