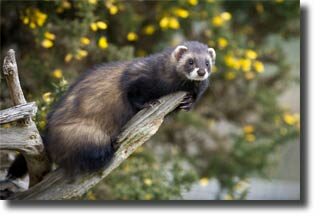 In England alone (as of 2009), the rabbit population approaches 50 million. In order to rid themselves of what is known as a “pest” species, British authorities have employed several methods of extermination, relocation not an option due to the tendency of rabbits to multiply at prodigious rates.

The main choices are: Shooting, hunting dogs, birds of prey, snaring, disease introduction, gassing and ferreting. As will be seen, ferret hunting is the most desirable option

Shooting. While guns definitely kill rabbits, they do so on a one-to-one basis, making this method labor-intensive, as it would be difficult if not impossible to make enough kill shots when they are in a group. Also, the buckshot from a shotgun will render the rabbit meat inedible, and the pelt unusable. Shooting them after they are caught is a little more effective, though other quieter, neater and safer methods are available.

Hunting dogs. Lurchers and other running dogs are used to chase and catch rabbits, but this technique takes much more time than other methods, and there is considerable upkeep and training involved.

Birds of prey. As with dogs, this is a time-consuming way to reduce the rabbit population. Also, birds of prey services are much harder to secure than those of hunting dogs.

Snaring. While an effective way to control rabbits, it is best left to professionals, due to the steep learning curve involving location and setup of traps. If they are not set up correctly, they can cause the snared rabbit needless suffering. And while they are used in drives (such as in Australia), terrain challenges and lack of available manpower may make this method extremely impractical.

Disease introduction. Attempted in the 1950’s, the disease caused by myxomatosis decimated the rabbit population, but also caused prolonged pain and suffering. Its use is now illegal in many areas.

Gassing. Cyanide is the poison of choice, and most effective at killing rabbits- as well as anything else in the vicinity. For this reason, its application must be done by a professional- yet even with expert help, its use may be severely restricted due to health and safety concerns.

Which brings us to ferret hunting.

Ferrets have been used for centuries to aid the hunter with rabbit extermination. Ferrets do this not by killing the rabbit, but by finding entry or exit tunnels, entering them, and chasing the frightened rabbit or rabbits out the other hole- into snares or netting, where the hunter dispatches (or cages), the rabbit in a humane fashion.

With the possible exception of dachshunds, ferrets are the only domesticated animal small enough to enter rabbit warrens, and then follow their natural instinct to find and chase rabbits to the surface.

Though illegal in a few countries, ferret hunting is widely accepted in others, especially where crop destruction is threatening food supplies and the local economy.

In order to be successful at ferret hunting, you must either find a trained professional, or secure your own ferrets and be trained in their use.

First, learn about the care, feeding and training of ferrets. These animals are domesticated and will double as pets, if cared for properly. While it is always preferable to get ferrets after they are weaned, you may be able to procure them later on from shelters, as rescue animals.

Once that is accomplished, purchase the right equipment:

Carrying case. Whether homemade or purchased from a pet shop, your little hunter will need a safe place to stay as you travel. Regardless of how well trained they are, ferrets, like any other animal, can panic and run off if frightened or spooked.

Netting. Purse nets are the best to buy, as far as snaring is concerned. Make sure they are made of nylon and not hemp, which tends to rot if not dried out properly after every use.
Spade. In case you need to dig your ferret out of a hole or warren.

Knife or brass priest. Unless you are planning on having someone else do the killing, you will need some way to dispatch the trapped rabbits- though there is something to be said for simply dislocating their necks.

While a combination of the above methods may sometimes be the best way to hunt for and exterminate rabbits or rodents, ferret hunting represents the most humane, safest and environmentally-friendly method.