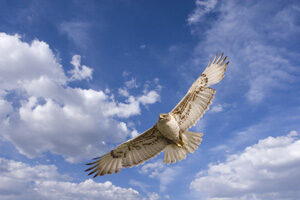 White Hawks (Leucopternis albicollis) are magnificent birds that are indigenous to Mexico, as well as Central and South America. They range in size, but typically have a wingspan of approximately two feet wide. They have white heads and bodies, with black on the tips of their wings and tail.

They feed on reptiles, insects, and even some small mammals. They are a delight to behold and display a beautiful midair courting ritual for some lucky observers. These birds of prey use sticks to build large platform-style nests in which they lay one dark blue egg per reproductive cycle.

White Hawks are a favorite among hawk enthusiasts, and can be divided into four different subspecies, outlined as follows.

Fully albino Red Tailed Hawks are often misidentified as White Hawks due to their similar appearance. The albino Red Tail is pure white over most of its body, with subtle hints of red at the tips of its tail. It has no black on it, like the White Hawk.

Red Tailed Hawks live in an entirely different type of climate, too, and are found in regions across North America. An albino of this species is quite rare and is certainly a fine sight to see, but is not to be mistaken for an actual White Hawk.

The White Hawk is a magnificent creature, and usually leaves quite an impression upon those who chance to see it. Many describe them as angelic in appearance, a massive winged raptor soaring through the sky.

Birds, and especially white birds, hold deep symbolism for virtually every culture on earth. For many, birds represent freedom and strength. Birds of prey seem stoic and wise, steadfast and powerful. White Hawks are all of these things and they are also more unusual, more mysterious.

In many cultures, white birds are seen as a link between the living world and the spirit world. The release of birds at some funerals is indicative of this and usually represents the sending off of the deceased person’s spirit to some kind of afterlife. Some Native American tribes believe that white birds carry messages from the world of the deceased. Hawks in particular are seen as symbols of truthfulness, prescience, and clarity.