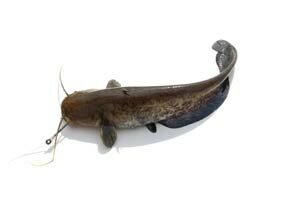 How Many Types Of Catfish Are There?

The number of different types of catfish is amazingly large, with over 30 different species found in the United States alone. Catfish are native to all the continents, but are found mostly countries bordering the Atlantic and Indian oceans, and generally are not found in the Pacific regions. South America accounts for the overwhelming majority of different catfish species.

To the average American, the most important of the different types of catfish, is the one that is pan fried, Cajun-style. This is typically one of the species of channel catfish, at times caught in the wild, at other times coming from catfish farms. The largest catfish in the United States is the Mississippi catfish, which often weighs well over 100 pounds, and is considered to be an excellent food fish. Fishermen, especially those fishing from the shore or for docks, for other varieties of fish, often catch a catfish considered to be a trash fish, the common bullhead.

Barbels, Not Barbells – Almost all types of catfish are characterized by their barbels, protrusions from near their mouths that resemble the whiskers of a cat, hence the name. Not all catfish have these barbels, but most species do. Catfish don’t have scales in the sense that most types of fish have, but are either smooth-skinned, similar to the shark, or covered with armored plates. Most types of catfish are not at all dangerous to humans. A few very large species are believed to have attacked humans, but it is believed that these instances were primarily defensive acts on the part of the fish. A fish as large as some catfish grow, and having a varied appetite could easily look upon humans, small humans especially, that might be in the water, as food. Most of these fish are bottom feeders and scavengers however. The only catfish which is considered to be a threat to human beings is the smallest of the species, the Candiru, a tiny parasite. However, where deaths due to catfish have occasionally been reported, none have ever been officially documented. The dorsal spines of some types of catfish contain toxins and can inflict painful stings, but these are not considered potentially fatal, or even very serious, unless one were to suffer a rare allergic reaction. Even the spines of some types of bullhead can sting enough to irritate the skin.

Most Species Have Much In Common – While different types of catfish have different characteristics, most are bottom feeders and have flattened heads, presumably to help them dig along the bottom in search of food. Most have quite wide mouths, though a few species have sucker mouths. Catfish generally swallow their food whole instead of chewing it, and suck up most smaller food items like a vacuum cleaner.

A Fish For All Reasons – The variety of catfish is really is quite amazing, and even the major categories can’t be counted on the fingers of both hands. These fish exist in all sizes, from the giants found in the Mississippi river and the Mekong delta in Vietnam, to the tiny parasitic variety. Some, like the bullhead, are regarded as trash fish, others are commercially quite valuable, and are culinary delights when well prepared. There are a number of types of catfish which make extremely interesting inhabitants in a home aquarium. Some aquarium species are not much larger than a minnow, to whom the catfish is related. Others grow to a size where they are better suited to life in an institutional or commercial aquarium, rather than a home aquarium. The “lowly” catfish deserves the name only because of its habitual proximity to the bottom of a stream or channel, but as an interesting fish, it is anything but. If you’re looking for an interesting fish or two to add to your freshwater aquarium, by all means give the catfish a try.