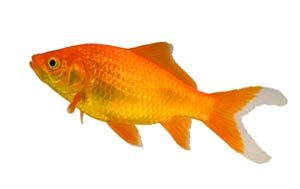 Goldfish Lifespan Is A Bit Hard To Figure Out

When asked about goldfish lifespan, the number 43 years (possibly 44) is often trotted out as the world’s record lifespan for a goldfish. This number is then qualified by the statement “Well, 10 years or so is typical.” The fact of the matter is, there are so many variables, including different varieties and different environments, that putting a finger on an average goldfish lifespan is at best a good guess.

Many people are surprised of course that goldfish live more than just a couple of years. Part of this is due to their own experience, where they’ve had a goldfish given to them, placed it in a bowl, and it did fine for a couple of years but then died. When one considers the fact that the goldfish evolved, through several centuries (about 10 of them) of selective breeding, from the carp, and is in the same family as the koi, both very long lived fishes, 10 to 20 years of life for a goldfish doesn’t seem so strange after all. Even the little minnow, a relative of the carp and the goldfish, hangs around for 5 years or more, if it isn’t eaten by something before then.

If you’re interested in knowing how long your goldfish might be expected to live, it depends upon a couple of things, genetics and environment. Almost all varieties of goldfish have a number of years to look forward to, but the more common varieties generally outlive the fancy or exotic varieties by a factor of at least 2. Put another way, the common goldfish lifespan is usually between 10 and 20 years, while the fancy or exotic goldfish lifespan is generally on the order of 8 to 10 years. This assumes that the fish live in a healthy environment, and are well cared for.

The environment is really quite important. A goldfish kept in a small bowl may live for a few years, but generally not much longer. Unless the water in the bowl is kept clean on a daily basis, the goldfish is apt to become ill and die in its own waste products. Goldfish do better in a large aquarium, where a lifespan of 10 years is not uncommon. Goldfish living in outdoor ponds often live twice that long, especially when adequately protected form predators such as cats and raccoons.

The secret to a lengthy goldfish lifespan really depends upon three rather straightforward things. First, goldfish require plenty of room, with the exotic varieties needing at least 10 gallons of water per fish, and the common varieties twice that. Second, the water must be kept at a high level of quality, in other words kept relatively clean, and third, the goldfish must not be overfed. Overfeeding is not only harmful to the fish itself, but uneaten food contributes to poor water quality. Lifespan can also depend upon under what circumstances you first got the fish, and whether it was a healthy fish to begin with. Even feeder fish, given away free, or sold for less than one dollar, can grow to a fairly large size and live out a typical lifespan if well cared for.

Maybe the most important thing to consider about goldfish lifespan is, when you first purchase a goldfish, you’ll want to make a commitment to keep good care of it for many years to come. Not everyone does that, or even thinks about it.