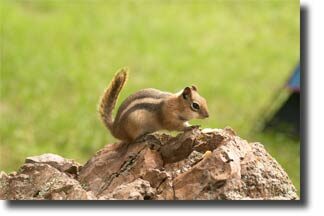 The Truth About Chipmunk Traps

While plenty of means exist for the elimination of chipmunks, the most practical method of them all is chipmunk traps. But in order to successfully capture these small, crafty pests, several things have to be taken into consideration.

First of all, make sure it is chipmunks, and not squirrels, you are dealing with. Generally speaking, chipmunks are smaller than squirrels, and as such they eat less, and do less damage than their larger counterparts.

The 22 species of Eastern and Western chipmunks (indigenous to the United States and Canada), are also marked differently than squirrels, having a set of light-colored stripes above and below their eyes, as well as distinct line and color patterns running along their backs. Also, squirrels tend to run with their tails horizontal to the ground, while squirrels run with their tails stuck straight up in the air.

If, for some reason, you haven’t been able to catch the little buggers in the act, look for the following signs:

Having correctly identified chipmunks as the problem, why is live trapping considered the most effective method for dealing with them? Let’s look at the options:

Which leaves only one viable possibility: chipmunk traps. Whether or not you rent or purchase, live traps are the safest, cheapest, and most humane way of dealing with this year-round nuisance. Having settled on chipmunk traps as the best method, what kind should you use? This all depends on your frame of mind. If you don’t want to kill them, and would rather relocate the critters after capture, use a Havahart-style trap.  But if you’re more interested in just eliminating the nuisance, common rat snap traps are the way to go. Make sure, though that these traps are placed where they cannot be found by children or pets.

Should you rent or buy? This all depends on how frequently chipmunks visit your property, and how many there are. Then again, the farther out of town you live, the better it is to own your own traps.

And what should be done with the pests after you catch them? For one thing, avoid physical contact with them. As cute as they might appear to be- and aside from the fact that you might get bitten- the Western species spreads fleas, ticks and diseases such as Rocky Mountain spotted fever, tularemia and the plague.