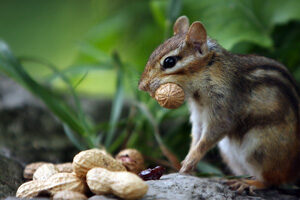 Many Potential Sources Of Chipmunk Food

In one sense, chipmunk food can be found almost anywhere, or at least wherever there is vegetation of one kind or another and/or insects. The chipmunk is not terribly picky about what it will eat, or store to eat later. If there is a favorite chipmunk food it is probably nuts, but they eat many different types of seeds and grains, as well as vegetables and fruit.

Taking Possession Of A Tree – At first glance, one has to observe a chipmunk for a while to get a sense for what it eats. Occasionally the chipmunk can be caught in the act of enjoying a meal, but usually they are scrambling around in search of food or returning food to their burrows, and just what kind of chipmunk food is involved isn’t always obvious. While chipmunks are basically ground dwellers, they won’t hesitate to go up into a tree if the branches contain something good to eat. This something is often a nut of one type or another. Nuts are particularly good for a chipmunk’s health as it needs something like the hard shells to keep its front teeth worn down to a reasonable length. The necessity for this type of food should be noted if one is keeping a chipmunk as a pet.

The chipmunk will also at times eat fruit hanging from the branches of a tree, or seeds which are found in the cones of evergreens. When an evergreen shrub or tree has produced mature cones, that is cones containing seeds ready for eating, a chipmunk will sometimes adopt and take possession of a tree, and raise quite a fuss if a squirrel, the family pet, or a human approaches too closely. Despite there diminutive size, chipmunks can be quite protective and even aggressive, when they have located a very excellent supply of food.

Rose Hip Banquet – Chipmunks in our garden have taken a particular liking to rose hips. The rose hips are only available during the latter part of the summer and early fall. By late September, chipmunk and birds have taken care of any that haven’t been pruned away or taken for human consumption. Chipmunks often take a rose hip to a preferred spot, sit on their haunches, and enjoy their meal before heading out to find another rose hip. This preferred spot is often a large rock, and over a period of time the rock becomes covered with pieces of rose hip the chipmunk did not consume. Many if not most of the seeds in the rose hips no doubt found their way back into the chipmunk’s burrow for storage.

Cute, But Can Be Pests As Well – As cute as chipmunks are, and few will dispute that they are indeed cute little fellows, their eating habits can at times make them pests Although they seldom raid the vegetable garden, although they have been known to spend time in a corn patch when the cobs are getting ripe. They will often rob from bird feeders which haven’t been made squirrel proof. Chipmunks will also eat the eggs of many songbirds, and too many chipmunks in one area can discourage songbirds from nesting in that area.

Willing To Accept A Handout – A chipmunk which has become used to the presence of humans can become rather tame, and if that happens it is usually not adverse to accepting a handout. Almost anything offered will be seen as potential chipmunk food, so one has to be a bit careful not to offer a chipmunk food that might not be good for it. Although a chipmunk needs its supply of salt, heavily salted peanuts would not be very good, nor would any grain or nut containing an excess of sugar. A chipmunk would likely even accept a tidbit of meat. Though they are not primarily meat eaters, meat sometimes finds its way into their diet. Since chipmunks don’t depend on any one type of food or even depend on a narrow range of foods, you’ll find these little guys in many varied and different habitats.