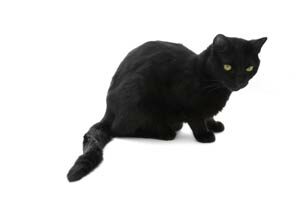 The Truth about Black Kittens

People in every culture have folktales and superstitions about black cats but they can be very different, for in some cases black kittens can be a sign of good fortune and in others, bad fortune. In the United States, the overall consensus seems to be that a black cat crossing your path is supposed to be bad luck. It is the same belief in many European countries, but in the nations in the United Kingdom and in Japan, it is an omen of good luck.

In Germany, it is even more confusing. That’s because the end result is supposed to be based on which direction the black cat is traveling. If the cat crosses your path moving from right to left, it might bring bad luck, but if a black cat crosses your path from left to right, it is might mean just the opposite–it’s thought to be an omen of good luck.

There are even more possible consequences if you cross the path of a black cat as opposed to the cat crossing yours. That is supposed to mean that you are going to have some very big problems, indeed. But just to balance out the effects of black kittens and cats, consider these instances with opposite results: In Latvia, farmers believe that seeing a black cat in the barn is an indicator of a good harvest year. And in Scotland, seeing black kittens on a porch means good financial fortune and happiness.

In another case, if you find a white hair on your black cat, and you pull it out without getting scratched, it means you will have a very long and blessed marriage. One of the oldest tales of black cats in England tells us that wives of fishermen believed that if you kept a black cat in the house, your husband would come home from sea safely.

Black kittens also are not feared by thespians–it seems that having a black cat in the audience means that your play will be a huge success. In some countries, if you give a black cat as a gift to a bride, it means she will have good fortune.

Sometimes it is impossible to fathom what some humans are thinking when they take superstitions about black kittens or cats to heart. Some people, however, are cruel to black cats simply because they are black. In centuries past, black cats were gathered up and killed and anyone who had a black cat as a pet was accused of being a witch.

In reality, there is no greater little ball of joy than a fuzzy little kitten, no matter whether it is black, white, gold, gray, or any other color. Black kittens bring the same joy to a home as any other colored kittens. They love to play, eat, sleep, and purr when they are content. Picking names for black kittens can also be a fun activity for kids and adults. There are so many possibilities: midnight, ebony, blackie, ink, inky, jet, slate, smokey, pepper, sable, shadow, licorice, sooty, lucky, shadow, spade, or dozens of other possibilities.

If you do come across black kittens or cats, or even black dogs in a shelter, don’t have any qualms about adopting one. Someone needs to come up big for all of those unwanted black animals that are not adopted each year for no other reason than being born the wrong color. You can be guaranteed your black kitten will give you more love and joy than you can ever imagine.