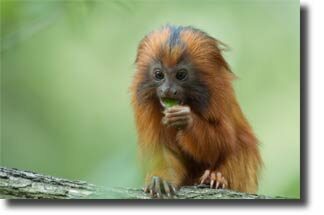 A Quick Guide to Answering the Question: What do Monkeys Eat?

Many people often ponder the question “what do monkeys eat?” Almost everyone knows that any monkey will pretty much eat a banana. This is taught to everyone from the time they are in elementary school and learning about animals until graduation. However, there are a wide variety of other things monkeys find appealing and even appetizing. Throughout this article we will examine monkeys, including the topic of the monkey diet.

There are over one hundred and thirty different species of monkeys throughout the world. There are actually two different kinds of monkeys typically referred to as the Old World (Asian and African monkeys) and the New World (American monkeys). These types of monkeys are relatively different, especially in terms of their tails. American monkeys tend to have tails that are long and used for holding onto branches, which is typically seen in most zoos in the United States. On the other hand, the Old World monkeys have extremely small tails that are very straight.

Obviously regardless of type, monkeys cannot always find bananas in every habitat that they find themselves living. Therefore, when answering the question of ‘what do monkeys eat?” it is essential to take into consideration monkeys from all different regions of the world.

Regardless of location, most monkeys tend to eat a variety of different fruits and vegetables. Furthermore, they eat leaves and even flowers. Insects, reptiles small in size, and eggs are also appetizing to most monkeys. Seeds and even the occasional tapping into a tree and eating bark are common for monkeys living in the wild. Despite the consumption of insects and reptiles on occasions, most monkeys are primarily herbivores by nature preferring the foods listed above but are sometimes caught munching on grass.

American spider monkeys in particular prefer seeds and fruits to anything else. Approximately ninety percent of their diet consists of the two listed above. Along with bark and leaves, these monkeys actually enjoy eating honey.

Monkeys in general tend to eat on the move. They are inclined to consume a good bit of food for the time period that elapses, preferring to eat while climbing or hanging. They normally eat the food as they obtain it rather than hording it for later. Oddly enough, the women play a huge role in locating food for the troop (monkeys in groups). In the event that food seems to be sparse, the rest of the members will disperse in an effort to help find food nearby.

Monkeys within a zoo tend to have a slightly different diet than monkeys in the wild due to their captivity. Since zoo environments are simulated and do not allow monkeys to engage in an area that is exactly like their natural habitat, eating is less likely to be scouted for and more likely to be delivered on a schedule. Within zoos, monkeys are fed everything from bananas to monkey chow (which is very similar to dog food for monkeys). Celery, raisins, lettuce, bread, apples, oranges, and other fruits and vegetables are frequently given to monkeys in captivity.

It is essential to note that when asking, “What do monkeys eat?” that we realize monkeys in the wild have access to different things depending on where they live. Those within the rainforest may eat their share of coconuts, while monkeys in a simulated environment, like a zoo, will eat the foods described above. Furthermore, different types of monkeys may prefer a different list of foods than others. However, this article aims at answering the question of “what do monkeys eat?” encompassing monkeys in general, not geared toward a specific species or whether they are wild or captive.