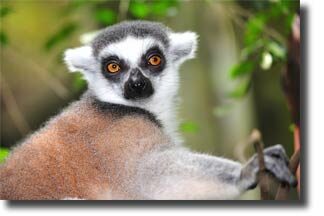 Some Interesting Facts About The Arboreal Lemur

Arboreal lemur is an animal that lives specifically on the island of Madagascar in Africa. It is a primate and it is a member of the lemuridae family. There are many different species of lemur and they easily adapt to either a warm wet climate like the rain forest or a dryer climate like the desert area.

Lemurs come in all shapes and sizes. The smallest of the species can weight around one once. While the biggest can reach 15 pounds and stand 4 foot tall.

Arboreal lemurs resemble small monkeys. This makes sense because they are also primates and actually evolved from monkeys. They are furry with big bulging eyes. They have long ears which are hidden under their thick hair. They have longer snouts and wet, sensitive noses. Their tails are long and used to help them balance while swinging through trees. Although the arboreal lemur has a tail that appears to be strong, they cannot hang by it and sleep like other primates can.

The term arboreal means that the lemur spends most of its time in trees. Lemur means ghosts and these animals are called that because of their wild stare and also because they are nocturnal and only active at night.  Although they have been known to eat mammals their diet mainly consists of plants and sometimes bugs.

The arboreal lemur is a social animal. It can forage for food in the late day and return to socialize with its group at night. Species that tend to be in the same group can become defensive and try to protect the group from out side invaders. The lemurs communicate by scent markings, like a dog might. They also make similar sounds and noises that can clearly mean something. The scents can be left by urinating or spreading feces on trees and bushes. The sounds may sound the same but they can warn another member of the group of an attack and a boundary call can be used. The lemurs also use a special sound to contact another group member.

When the male lemurs feel that there are being threatened or must have a fight to determine who can have sex with the female, they have what is called a stink fight. They excrete urine and feces and wipe them on their tails. Then they wave the tails and making threatening noises to the offending lemur. Females also mark their territory with glandular scents.

Lemurs can live up to 25 years in the wild and 35 years in captivity and have 1 cycle ever year for having offspring. Between august and early October a female lemur will give birth to 1 or 2 babies. For a few months they will ride on the female mother hanging on to her waist. Then after a few months it leans to ride on the mothers back. It can take a full 2 years for the baby lemur to be able to go off on its own and survive. The lemur does not mate for life. Once a male lemur has successfully mated he quickly returns to looking of other females.

The Arboreal lemur has 2 major predators. They are eagles and hawks. These birds that are also mostly active at night can swoop in and steal a baby lemur from its sleeping place. They also look for any lemur that has not climbed up far enough to get protection from the surrounding tree. The lemur must be careful and aware about where they sleep.

The biggest threat to the lemur population is the human. Their natural habitat is being destroyed by the cultivation of trees and the vanishing rain forest. Lemurs continue to be near the top of the endangered species list.