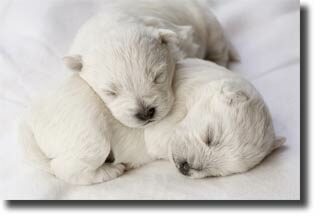 All About Westie Pups

If you are in search of a friendly and loving dog, then Westie pups may be for you. Many people lately have fallen in love with these dogs, making them a very popular breed for owners of all sizes. They are particularly good if you have never owned a dog before, and can be given as pets to children. This article will explain Westie pups and what makes them so desirable today.

The name of this breed actually is a nickname; the full name is West Highland White Terrier. These dogs have been described as sturdy and hardy, and generally stand about 9 to 11 inches tall. They can grow as heavy as 22 pounds, although most will weigh 13-20 pounds. A westie physically is compact, with a thick white coat and pointy ears. In this way they resemble the classic terrier size and shape (stocky body, relatively-short snout, alert posture).

Westie pups come from dogs called Cairn terriers. In the 19th century, breeders of Cairn terriers in Scotland discovered that they had white puppies in the litter. These puppies were eventually bred into the westies that we know and love today. Other than their look, they very strongly resemble Cairns in personality and behavior. Initially Westies were bred to hunt rats and other types of vermin, which is one of the reasons why they have the personality that they do.

Most people buy Westie pups because of their personality. These dogs are born leaders who are lively and spirited. As mentioned above, they are great with children and can be fairly friendly with strangers and other adults – as well as other dogs. Westies are also spunky and energetic, and will play with just about anyone. They even make good guard dogs, despite their small size – their loyalty and alertness make them quite protective of their owners. If allowed to dominate the human, though, Westies can be a little aggressive and can fall victim to “small dog syndrome” – the tendency to overcompensate for small size with overly aggressive barking and behavior.

If you want to care for Westie pups, then are there a few things you should know. For starters, they travel well, so there is no need to worry about trying to take your dog anywhere. They are also fairly well-behaved, but you have to assert yourself early on as the leader of the pack before they grow up and get into bad habits. As with other terriers, these dogs also need to be taken out on walks daily. Simply playing with them will not provide for suitable release of their energy (although a fenced-in backyard does wonders).

In terms of hygiene, besides the usual routines of nail clipping and teeth brushing, Westies only require brushings with a stiff bristle brush. Washing daily is not necessary either; the coat hardly sheds and is easily maintained. If you want the coat to maintain its white color, then try sprinkling white grooming powder in once every other week. This, combined with regular brushing, will help the coat stay healthy and attractive – although it will not and should not be glossy or shiny like other breeds.

If you want one of these dogs, then you should look into reputable Westie breeders who have a solid reputation for healthy, well-behaved puppies. Be sure to take your new Westie to the vet if it is a puppy and have all of its shots (which will require at least two visits during the first six months). Also, be prepared to have an active little dog on your hands who will run and play to its hearts content. In conclusion, Westies are smart, energetic, and loyal pets who will make a welcome addition to any household.