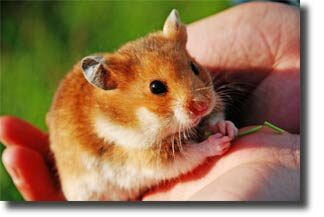 A Beginner’s Guide to Types of Hamsters

A hamster is one of the most popular of small pets, but choosing the first one can be confusing when faced with all of the different types of hamsters available for purchase.  A quick tutorial on the various hamster species can be of great help for the beginner pet owner.

Hamster history is quite interesting.  The small, furry rodent was discovered living in the deserts of Syria as far back as the mid 1800’s by a zoologist, who gave it the name Cricetus auratus, translated as Golden Hamster.   Just about 100 years later, another zoologist found a family of hamsters in Syria, some of which were bred, producing what was to become the beginning of all pet hamsters in existence today.

The breed of hamster chosen for the pet will dictate many of the accessory items needed, so having some knowledge of the different breeds will be needed before choosing the pet.  The following types of hamsters are those which are found almost exclusively in the pet world:

Syrian Hamster
The Syrian hamster represents the most common of the rodents.  They are also the largest of the species, with an average adult size of between four to six inches in length.  Several subtypes exist within the category of Syrians, with names that generally describe the appearance of the animal.  Golden Hamsters are so named for the coloration of that original hamster found in Syria hundreds of years ago.  Fancy Hamsters are those non-golden colored Syrians which feature short hair.  Long haired varieties of the Syrian are referred to as Teddy Bear Hamsters, while those Syrian Hamsters sporting a solid black coat are called Black Bears.  All of the Syrian varieties are solitary animals; they must be contained separately in their cages if more than one hamster is owned to avoid serious and deadly conflicts between them.  If bred, the young must be separated upon reaching the age of 8 weeks for this reason.  Between two to three years will be the life expectancy of a pet Syrian.

Campbells Russian
This variety of hamster is smaller in size than the Syrian; reaching only 3 inches in length at adulthood.  They are not as amenable to humans as the Syrian variety, prone to biting and aggressive behavior as adults although as babies they can be very cuddly.   A Campbell hamster would not be a good choice as a pet for a young child due to this tendency.  Another noticeable difference between the Campbell and the Syrian is that Campbells enjoy and need the company of other hamsters.  If breeding is not the plan for your hamster, the Campbell is likely not the variety for you.

Winter White Russian
Another small hamster, the Winter White is not as easily found as the Campbell.  True to its name, the fur of these rodents becomes white in the winter.  This variety is also a very social creature, and may not be a good pet for the same reasons as the Campbell.

Chinese Hamsters
Small in stature, the Chinese Hamster are generally far less common than other types.  Often called “rat like” when described, the Chinese has a thin body frame and a longer tail.  It possesses a friendly temperament, and lives approximately 2 years.

Roborovski
The smallest and rarest of all types of hamsters, the Robo reaches only 2 inches long.  Fleet footed, this variety enjoys socializing in groups or pairs; living about 3 years on average.

Knowing the different types of hamsters and their characteristics can help to decide which would be the best pet for you and what type of home it will need.  Armed with these facts before going to the pet store, choosing the ideal hamster will be easy for the beginner pet owner.