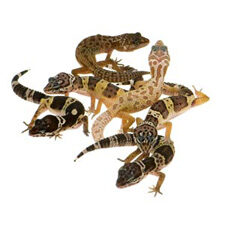 Facts About Different Types of Geckos

There are a variety of types of geckos throughout the world. These little lizards have becoming quite popular as of late even being the main character in commercials of a certain insurance company. Although this commercial is misleading in suggesting that geckos can talk, there are multiple types of geckos that can communicate with one another. A few of the thousands of types will be explored in detail throughout this article.

These Madagascar day geckos are also known as gold dust day geckos. These reptiles all range from relatively small in terms of lizards to average size. Preferring warmer weather, you will find them in a variety of warm areas throughout the world. Believe it or not, these geckos are actually able to communicate with one another by making chirping noises. There are at least 2,000 species of geckos that exist; however, these are only the ones that we are currently are aware of their existence. It is likely that there are several more species out there.

First, let’s examine some of the common characteristics of most types of geckos. Almost all varieties of the gecko lack eyelids. In the place of these eyelids lies a membrane that is completely transparent. Their tongues are used to lick this membrane during the cleaning process. When frightened or needing to defend themselves, most of the species will elicit a horrible smell. Furthermore, climbing is completely made easy for species that have special toe pads.

Most people do not complain when a gecko resides within their house since they frequently remove unwanted insects as well as bothersome mosquitoes. This is specifically common in areas that are extremely warm.

Among all of the species, the Delcourt gecko is the largest of all. Being native to New Zealand, this species can be as long as sixty centimeters. On the other hand, the Jaragua Sphaero is the smallest being only sixteen millimeters.

Now we will examine a few of the thousands of gecko species, but obviously time and space does not permit a complete examination of all species. The Leopard gecko originated in areas of Afghanistan and Pakistan, as well as India. Like most geckos and as given by the areas they are native of, they definitely love the sun and areas of high heat. The Leaf Tailed gecko is one of the reptiles living on Madagascar Island and is extremely camouflage in nature. This defense mechanism allows them to blend in with anything from trees to moss.

One of the larger species includes the Tokay gecko that can be as long as fourteen inches. Being spotted red is the best way to recognize the Green Day gecko, which is also found in Madagascar. As mentioned above about the communication, the Web-footed gecko takes advantages of their throats to create noises for communication with others in their species. The Kuhl’s gecko has two different types, one that uses flaps to fly, and one that does not. The Crocodile gecko (also known as the Moorish gecko) can grow up to six inches and are extremely strong. Their name comes from the spikes on their head and tail that looks like that seen on crocodiles. Other gecko species include the following: Gargoyle, Golden, House, Mediterranean, Ptychozoon, Morning, Dwarf, and much more.

As you can see, there are several different types of geckos that live throughout the world. These lizards not only vary in size, but also in physical appearance and characteristics. Not all geckos are able to communicate with one another, fly, or camouflage themselves; instead, their species designate not only their area of origination, but also their specific qualities. Be on the lookout for non-identified species of the gecko since they are very likely to exist.