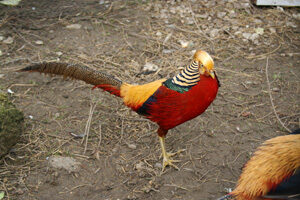 Characteristics of a Red Golden Pheasant

Because of a loss of vegetation needed to sustain life for pheasants, conservationists have worked hard to develop hybrids.  While the efforts have been successful, the crossbreeds have also resulted in the pheasant losing its original look.  Some people hunt pheasant in the wild while others choose to keep them as pets.  Of all species, the Golden Pheasant is the one most commonly kept in captivity.  In fact, this particular species has been kept as a pet dating back to the mid-18th century.

However, the wild version of this species is the Red Golden Pheasant, which is actually a gorgeous bird.  Of course, like all bird species, the female has dull coloring while the male is vibrant.  The reason for this is that the male serves the role as protector so when predators are near, bright and varied colors of the male serve to distract while the female pheasant can reach safety.

The colors of the male bird are truly remarkable.  In fact, of all birds, regardless of species, this one is considered one of the most brilliant and beautiful.  Males have a golden yellow colored crest, which is often tinged with a little red at the tip.  Then for the throat, face, and cape, the features are light orange.  Additionally, each of the feathers on these parts of the male body would have a blue/black border.  Then for the upper portion of the back, the features are a rich green color although the rest of the back, as well as the rump area have a gorgeous golden/yellow coloration.

The breast of the Red Golden Pheasant is a stunning scarlet red, which changes to a light chestnut brown down the flanks and under parts.  The wing tertiaries are an incredible shade of blue while the scapulars are a deep red.  Then looking at the tail feathers, the central ones are black although they are spotted with a beautiful cinnamon or rust color, along with the very tip of the tail.  The underside of the tail is also cinnamon but more of a buff color.  Going over the upper section of the tail is the same cinnamon buff color along with the tall, central feathers.

If you look at young males, coloration is much duller than an adult male, which can cause people to confuse them with hens.  However, young pheasants have spots on the tale and throughout the plumage are patches of red in varying hues whereas hens do not have this coloration.  As mentioned, females have some color but it is dull brown with a buff throat and face, and sides of brown or blackish.  The stomach is also buff but the hue is unique to the female bird.  One characteristic of the Red Golden Pheasant shared by both male and female is the bill and legs, which are yellow.

Although people keep several different species of Pheasant as pets, the Red Golden Pheasant is the recommended choice in that the species is easy to care for and does not require much space as some of the other species due to the smaller size.  Another benefit to keeping this particular species is that the bird mingles well with other birds regardless of type.  The only exception is that the Red Golden Pheasant does not do well in a cage or aviary with another pheasant of any species.

For personality, the male birds are showy, meaning they enjoy putting on a show due to loving attention.  Often, the ruff would be displayed, whether females are around to enjoy the show or not.  Finally, the Red Golden Pheasant handles extremely cold temperatures well.  Although it is suggested to provide shelter, most do well without it although having trees is necessary.  Although these birds also tolerate hot temperatures relative well, they do need shade and plenty of water.