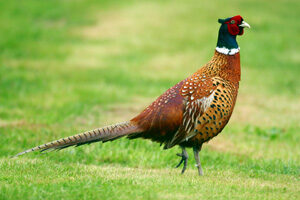 The more popular pheasant breeds in the United States and Canada number only 3 or 4, with the Chinese Ring-neck Pheasant being the best known, and the favorite breed as far as hunting is concerned. All pheasant breeds are native to Asia, with a number of species having been introduced to Europe and North and South America over the past couple of hundred years.

One of the more popular pheasants used for breeding in the United States is the very attractive Golden Pheasant, also called the Chinese Pheasant,  not to be confused with the Chinese Ring-necked Pheasant.

Pheasants can fly, which probably more than anything places them at the mercy of hunters who generally do not like to shoot at birds that are on the ground. Pheasants spend most of their time on the ground, usually only flying short distances if they feel the need. Their flight is fairly rapid but usually of a short duration and many species are rather clumsy fliers. They prefer to run for cover when threatened, using flight as a last resort. Most of the pheasant breeds are conspicuous by their long, pointed tails, and the males of most breeds feature bright colors, while the smaller females do not.

The Ring-necked Pheasants – The most common of the pheasant breeds in North America is the Chinese Ring-necked pheasant. This bird is typically about 3 feet in length (including the tail), and the males weigh just under 3 pounds when fully grown. Because of hunting pressures and predators, the average life span of most of these pheasants is between 2 and 3 years, with a little under a third of the population making it from one year to the next. One of the reasons the Chinese Ring-neck Pheasant is so popular with hunters is that, unlike many pheasant breeds, it has excellent flying ability, and thus makes a great game bird. The other reason of course is that the bird is prized for its plumage, and even more prized for its great taste when cooked.

The Melanistic Mutant –  Although not quite so well known among North American pheasant breeds, the Melanistic Mutant is coming into its own as a game bird. This particular breed features a beautiful iridescent greenish-black plumage, strikingly different in appearance from the Ring-necks. It is proving to be a very hardy breed, quite able to survive and reproduce in the wild once released. The Melanistic Mutant seems to favor areas where  soybean and corn crops, as well as grain crops, have been planted.

While The United States and Canada only have a small percentage of the total number of different pheasant breeds, the ones we have are excellent game birds, and excellent fare on the dinner table as well.