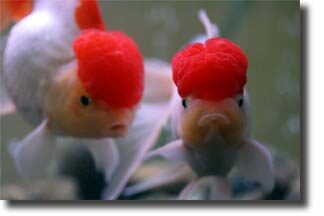 A Few Facts About The Oranda Goldfish

The Oranda goldfish is one of the fancy or exotic goldfish types, and one of the most popular of all goldfish types. Its most striking feature is a raspberry like growth or cap, which appears on the head of the fish when it is a little more than 1 year old. Another popular goldfish, the Lionhead, shares this unusual characteristic. Either fish could probably be called a “Raspberry” goldfish, but neither are. There are other similar types as well, called Tiger goldfish or simply Tiger heads.

Aside from the unusual formation on its head, the Oranda goldfish is a very attractive fish, having a somewhat egg-shaped body, a split tail fin and, and a variety of colors. The scales can have either a metallic quality, giving a shimmering appearance, or a matte appearance. In spite of the several color varieties which have been bred, the pure white Oranda, with the red hood, appears to be the favorite.

Oranda goldfish were first bred near the start of the 17th century, are generally fairly inexpensive, and have always enjoyed great popularity. In spite of their large numbers though, only a very few meet the exacting standard expected of a show fish. Most Orandas the therefore considered to be of a somewhat inferior quality, although most Oranda owners seldom seem to mind. The Oranda can grow to a length of 10 inches and, as such, should not be kept in a tank with a capacity of less than 30 gallons, and more, if other fish are to be in the same tank. The male is generally slightly smaller and more slender than the female. The Oranda gets on well with most other types of goldfish and, being a bottom feeder, serves a useful purpose in helping to keep the environment in the tank clean.

The Oranda goldfish is generally regarded as an easy keeper, with a peaceful temperament.  It will eat the same general types of fish foods that other goldfish are fed. A little vegetable now and then is particularly good for this variety. It is a bit fragile however, as compared to many other goldfish types. The Oranda cannot tolerate very cold water, as a common goldfish can, hence is not a good candidate for an outdoor pond, except in a location where the water temperature is unlikely to drop below 65 degrees F. Once the Oranda has developed its characteristic hood, water cleanliness becomes extra important, as the folds in the hood, especially when the hood becomes larger, can become breeding grounds for bacteria, and the Oranda can become susceptible to infections.

One can breed Oranda goldfish although it can be difficult to establish the sex of the fish you may have in your tank. The male will help out in this regard by developing white spots on its head as breeding season approaches. These spots are often confused with a bacterial infection (ich) which is somewhat similar in appearance, but these spots are actually breeding tubercles. Even when breeding is successful, the only a few of the offspring may turn out to be high quality Orandas.

Since they are relatively inexpensive and easy to keep in an indoor aquarium, the Oranda goldfish is a good candidate for a household pet. About the only cautionary note is to make extra certain that the water is not allowed to get dirty, especially once the red hood has started to form and to grow. With that said, you should have a healthy and very beautiful goldfish to admire.