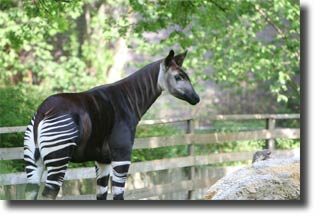 Several okapi facts make this herbivore interesting. They eat tree/bush buds and leaves, various grasses, fruit, ferns or other smaller plants and even fungi; many of which, though loved by the okapi are quite poisonous to humans. The okapis were known by the Egyptian that has been depicted by carved images of the animal when it was as a gift from the Ethiopians to the Achaemenid kingdom. Europeans in Africa who heard of this animal called it the African unicorn.

The okapi is native to the Ituri Rainforest, located in central Africa. Though it bears markings on its hind legs that bring the zebra to mind, okapi facts place it more closely related to the giraffe. Virtually, unknown until 1901, there are more than 10,000 in existence and 40 displayed to the public worldwide.

The okapi have a dark chestnut to reddish purple colored covering over most of their bodies, with the same striking horizontal markings on the front and back legs as a zebra. While it is not known for sure, the markings are believed to help the young be able to follow their mothers through the density of the rain forest underbrush. Of course, they also provide camouflage.

Though the body is shaped similar to that of the giraffe, the okapi has a much shorter neck. Both species, however, have long (12 inch), blue tongues that are flexible enough to strip leaves and buds from bushes and trees. Okapi facts suggest they forage along well-trodden paths throughout their territory of the forest which have been marked by scent glands on the feet or urine.

The home ranges of the male okapi are larger than those of the female. Generally, they are not social animals, preferring to live in seclusion. They do tolerate each other in the wild and will feed together (small groups) for short periods of time. Males are protective of the territory they consider theirs, but permit females to pass through to forage.

The days are active for the okapi. Facts indicate to locate breeding partners they use their sense of smell. Their courtship/mating ritual facts have been gathered by observing them in captivity where prospective partners begin the process by circling, sniffing, and finally, licking one another. At some point, the male displays dominance with the extension of his neck, by the toss of his head, and ending with one leg thrust more forward then the others. Shortly thereafter, this display is followed by a swift mounting and copulation. Once mating has been completed the male and female go their separate ways. Gestation lasts roughly 440 days after which females retreat into the forest’s dense vegetation to give birth.

The newborn okapi weigh from 14-30 kg at birth. They nurse within the first thirty minutes and stand shortly thereafter. The young spend their first days following the mother and getting to know their environment. Once acclimated the young find an ideal hiding spot to make their own nest where they spend 80% of their next few months. This particular hiding technique is attributed to their rapid growth as well as providing protection from any predators. In captivity the okapi live about 30 years.