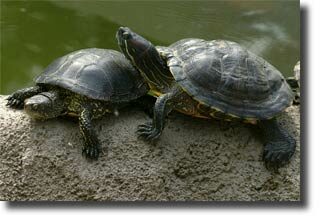 A Look At A Few Different Kinds Of Turtles

There is in the neighborhood of 300 kinds of turtles in the world today, plus many more species which are long extinct. The turtle, which is a member of the reptile family, has been around for a very long time, over 200 million years in fact. They are believed to have been on the earth longer than snakes or lizards.

Turtles, Tortoises, And Terrapins – How different kinds of turtle are classified into major categories depends somewhat on language and whom you talk too. In general, it’s safe to say that there are three major types, turtles, tortoises, and terrapins, and one can go from there as far as doing a further breakdown of the different kinds is concerned. One problem with this scheme is that, depending on whether you are American, British, or Australian, the each of the three categories contains a slightly different mix of species.

Turtles come in all sizes, from miniature, a few inches in size, to giants which may be several feet from head to tail. The tortoise, such as those found on the Galapagos Islands are among the very large turtles. Tortoises are the largest of the land turtles. Other large turtle species are found among the kinds of turtles we call sea turtles. The Leatherback turtle, a sea turtle which can be found in all the oceans in the world, even the Arctic Ocean at times, is considered to be the largest of the various species. Another large sea turtle is the Loggerhead, which can grow to 4 feet long and whose diet consists of crabs, sea urchins and sponges. Most of the sea turtles have paddles or flippers instead of feet, and cannot navigate well on land. The females however will come on shore to lay their eggs.

The Softshell And Mud Turtles – Where sea turtles and tortoises make up two rather distinctive categories, another would be the softshell turtle. The softshell is a water loving turtle, which spends much of its time burrowing in the mud. Several species of softshell turtles are considered to be culinary delicacies and large numbers are harvested for that purpose in the southern United States and several of the islands of the Caribbean. Some species are strictly carnivorous, while others are omnivorous. It is not only the softshell turtle that prefers living in mud. There are several hard shelled species that also live in the mud, and make up the category appropriately called mud turtles.

The Pond Turtles – A final category of turtles is comprised of those we are most familiar with as pets, with a few notable exceptions. These are the pond turtles, most of whom are smaller than their sea turtle cousins. Some pond turtles live much of the time in the water, a few species live near water but are strictly land dwellers. If you take one of the land turtles home and put it in a tank of water it will drown, as it can’t swim. Like the tortoise, also a land turtle, these turtles do not have webbed feet, as is the case with many species of pond turtle. The pond turtles best known in the pet trade are the Red Eared Slider, The Spotted Turtle, and the Eastern Box Turtle. There are three species of pond turtles that are not recommended to be kept as pets, and these are the three species of snapping turtle. Snapping turtles can grow fairly large and a mature adult can weigh over 100 pounds. With their powerful jaws and hooked upper jaw, the snapping turtles need to be handled with a great deal of caution.

Two Species That Make Good Pets – The Red Eared Slider is probably the most common of the kinds of turtles kept as pets. It is a very intelligent animal as well as being quite social, even towards dog and cats. It is also known for its ability to climb, and to be able to escape from places where you would think it could be safely kept. The Reeves turtle is another pond turtle which makes a good pet, with a reputation of having a quirky personality. You’d need to talk with a Reeves’ owner to find out just what is meant by “quirky”.

Turtles have been with us a long time, though some species are on the endangered list. Most of the larger turtles have no real predators, though many of the smaller ones do. Turtle eggs are favored by a number of other animals, but if this were not the case, we would more than likely face an exploding turtle population. If we pay attention to preserving the habitats of the different kinds of turtles, it will help keep the population we have now, stable.