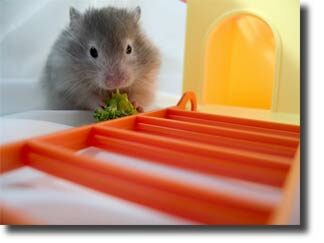 Some Hamster Illnesses That You May Want To Watch Out For

There are a great many hamster illnesses which could jeopardize both the quality and the length of your little friends’ already short life span. Many of the most prominent hamster illnesses are caused by one of three key issues, the first being improper nutrition. The next issue that you will need to be wary of is the cleanliness within your hamster’s home environment, and lastly but certainly not least important will be the temperatures and drafts that he is exposed to. Hamsters are pretty resilient, but there are certain things that you may not recognize as problems until he is in the last throws of sickness and little can be done to solve his problems.

The loss of fur can be a sign a of many different hamster illnesses, including mange, diet deficiency, allergies, a host of different fungus, skin infection, and ring worm, to name just a few. The loss of fur can be a simple issue to fix, though this issue can spread and lead to the hamster’s failure to maintain a healthy internal temperature. This can lead to respiratory problems, forced hibernation, and death, so be careful to monitor your hamster and his activities, noting and acting upon any changes in his behaviors or appearance. Loss of fur is treated topically and by keeping his living area as sterile as possible, but the issues which may have caused the loss of fur need to be addressed with veterinary attention and medications.

The types of hamster illnesses that are caused by malnourishment and improper diet can also result in loss of fur, but more likely you will see a lot of lethargy and a lack of shine and brilliance in the eyes. Of course, his plump body may begin to thin, and he may shake more if he isn’t eating well. You should be offering him some fresh fruits and vegetables each day, but make sure that you slice it finely and remove it each evening before it has a chance to spoil or cause mold in the cage. He may also enjoy some dairy products, especially if he is a she and there is a chance that she will need to provide extra nutrition to growing babies or through lactation.

Drafts and breezes which cause constant fluctuation in temperatures around your little guy will cause a great amount of hamster illnesses as well. Colds can be deadly to the hamster, and he can catch a cold from you, so be careful not to handle him when you are feeling under the weather. Cancer can strike your hamster as well, as well as the wet tail disease, eye problems, and mites. You will need to watch him carefully for all of these hamster illnesses if he is to live a full life with you.