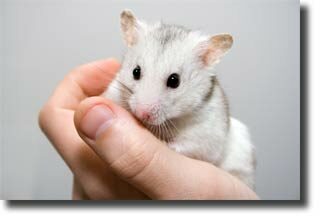 Hamster wet tail disease is not a disease directly associated with the animal’s tail. One of the symptoms of the disease is diarrhea, and it is discharges of fluids from the anus which cause the tail to be wet. The wet tail is therefore a symptom of a disease possibly caused by a bacterial infection.

Keep Your Fingers Crossed – Hamster wet tail disease is one of the most common, if not the most common disease hamsters are susceptible to. As is the case with a number of other diseases a hamster can be subjected to, wet tail is often fatal. It is treatable, but as is the case with hamsters, and many other so-called pocket pets, their small size can make treatment difficult and often when symptoms are first noticed, it is already too late. It can be a little disheartening to learn that a common disease of hamsters quite often does not have a positive outcome. Throw in the fact that hamster wet tail is highly contagious (not to humans), and if you have several hamsters, it can be a cause of some concern.

There are several species of hamsters, with the Syrian hamster being the species that you will most likely end up with as a pet. The Syrian hamster is the one most severely affected by wet tail, and of the three most common varieties of the Syrian hamster, the Golden hamster, the Fancy hamster, and the long-haired Teddy Bear hamster, it is the Teddy Bear hamster which seems to be most vulnerable to wet tail disease. Other species, namely the Dwarf hamster, European hamster, and Gray Armenian hamster are not as greatly troubled with the disease, if at all. Genetics are believed to play a role in the disease, at least to the extent that one should not purchase a hamster as a pet if it is known that one of its parents had suffered from wet tail disease.

Actual Cause Is Uncertain – There is a bacteria, Campylobacter, which is believed to play a role in wet tail disease, although whether the bacteria is the actual cause is not known. Stress is believed to play a major role in wet tail. While a hamster can acquire wet tail at any age, the overwhelming majority of cases affect weanlings, hamsters between 3 and 6 weeks of age. The weaning period is a particularly stressful time for a hamster. Overcrowding and dietary changes can also cause stress and result in an episode of wet tail. Although there are no foolproof methods of completely preventing the disease, keeping a pet hamster out of stressful situations is one thing that can help.

The Symptoms Of Hamster Wet Tail Disease – The first sign of the disease is watery diarrhea (hence the wet tail). This may last for several days, but once noticed, the hamster should be taken to a veterinarian immediately. It should also be quarantined if it is in an enclosure with other hamsters. If you handle the sick hamster, wash your hands before handling any of the others. Other symptoms are discharges of blood from the rectum, matted and rough fur, lethargy, and loss of appetite. A heretofore friendly hamster may suddenly appear to be very irritable. Any of these symptoms demand quick treatment, or death is almost a certainty.

Diarrhea Does Not Always Indicate Wet Tail – It should be noted that, while diarrhea is a definite symptom of wet tail disease, a hamster can suffer from diarrhea due to something in its diet, and in this case hamster wet tail disease is not an issue. A hamster suffering from diarrhea can most often be cured, given proper medication and if necessary, changes in its diet. Make sure your pet hamsters have a proper diet, plenty of fresh water, and clean living conditions, and you may never have to be concerned about wet tail disease. The thing to watch out for, with any pet, is sudden and noticeable change.