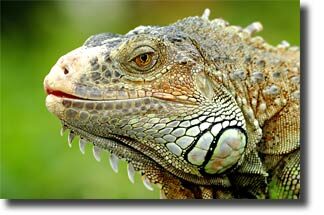 Some Interesting Facts About the Giant Iguana

The most popular Iguana being sought after as pets is the green, giant iguana. Throughout the article we will examine iguanas as a whole with emphasis being placed on the giant iguana since mainstream is pointing within that direction.

Iguanas are a type of lizard that originated from the Caribbean, Central America, and South America. Although these iguanas are classified in two different species, the lesser Antillean iguana and the green iguana, most people generally think of the green type when hearing the word “iguana.” Some common characteristics come to mind when thinking of these reptiles. First, there is a third parietal eye located on the back of their heads. Then, they have spines that run along their back all the way down to their tail. These reptiles also have multiple scales making their feel quite unique to the touch.

Believe it or not, all of these iguanas have superb vision and are able to see movements from a very long distance away. Their vision is a key characteristic to these species making them able to scout for food, communicate within their species, as well as providing a means for navigation. Furthermore, they readily camouflage with their environment, making them difficult to spot for other, larger animals.

The green iguanas are typically taken into captivity and raised as a household pet, which is proof by the giant iguana being very popular as or late. Although these iguanas are quite small when purchased in your local pet store, they are capable of growing extremely large in size, as noted by the name giant iguana. However, there are several different aspects of an iguana that will help you obtain a large adult iguana. So, when you go to the pet store, be on alert for the following qualities if you desire the iguana to grow as large as possible.

First, it is essential that you pick an iguana that appears healthy. Their high levels of alertness and activity generally denote their health. A healthy iguana will not merely sit around; instead, they will be more active with their tongues flickering in and out of their mouths as they curiously explore their surroundings. Another way to determine the overall health of the iguana is by examining their body thoroughly. Any reptile that lacks signs of scratches or lumps is more likely to be healthy.

Second, as with most reptiles, their ability to grow will depend on the cage in which you house them within. Smaller aquariums and containers will limit how large your iguana becomes in size. However, you could build your own cage, that is relatively large, and house it in your back yard allowing the iguana to be more in its natural habitat.

Third, the diet is absolutely essential. While these reptiles are young, they need to be fed every single day. Common foods include leaves, lettuce, pears, carrots, and much more. Be sure to request information from your pet store for more food recommendations when purchasing these lizards.

Finally, you must take into consideration numerous habitat conditions. Iguanas need to be in an environment that is at least eighty-five degrees, must be watered daily, have access to their own small swimming area, have climbing facilities, and proper lighting.

In conclusions, the green, giant iguanas have become a very popular pet and require a great deal of care and attention. If you are seeking a low-maintenance animal, you may be looking in the wrong direction. However, if you are able to meet their needs, these reptiles can grow fairly large and make a great addition to your home. Make sure to thoroughly research any animal before making it your pet to ensure proper care.