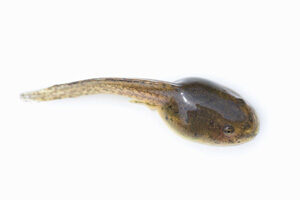 Feeding Tadpoles Is Not Complicated

When feeding tadpoles the main things to take into account are the native habitat of the tadpole, in other words the characteristics of the pond they normally would live in, and the tadpole’s age, since as they grow their diet changes.

A tadpole, also called a pollywog, is simply a frog in what could be called its larval stage. It is no longer an egg or hatching, and it is not quite yet a baby frog, but will undergo a metamorphosis that one can see occurring from day to day.

Before even considering the proper ways of feeding tadpoles, attention must be given to the water they will be kept in. Tadpoles kept in small glass jars tend not to live long, especially if the jar is left out in the sun for a few hours, as a youngsters tend to do. A 5 or 10 gallon aquarium will be just fine. An even smaller container may suffice if you only have one or two tadpoles to tend to. The important thing is not to allow the water to become polluted, either from tadpole waste, or uneaten food. Don’t use tap water, unless you have a private well, as the chemicals, especially chlorine, in city-supplied water will often do the little guys in.

Bringing Your Own Food – Feeding tadpoles isn’t much of a problem at first, as then the tadpoles have first hatched, they carry around their own lunch pail so to speak, technically called a sac or yolk. This stage lasts about a week, after which the tadpole starts going in search of food, typically pond algae.

For the next month, the tadpoles will subsist mainly on algae. If you can keep them supplied with fresh pond water that contains some algae fine, otherwise a good choice of tadpole food is finely crumbled goldfish food flakes. Some pet stores carry tadpole food, which presumably is even a better choice. Give the tadpoles a feeding daily, but keep watch to see if the water is becoming polluted, either by uneaten flakes, best removed, or tadpole poop.

If you have several tadpoles, and neglect to feed them for a day or two, they will start nibbling at one another. Several days without food and you may end up with a single, rather fat, but probably still hungry tadpole.

Lettuce Works – In nature, tadpoles will soon begin to feast on aquatic plants in addition to algae, and if you have a plant or two that can be placed in the container, that may be all the food the tadpole requires for several weeks. If you have no plants, a good substitute is lettuce. Most people recommend boiling the lettuce, then freezing the leaves, crumbling off a bit of lettuce every day. Whoever thought of this idea hit upon something tadpoles really like.

Dietary Changes – As tadpoles approach frog hood, a process that takes about 3 months, their tails will start to get shorter, their bodies longer and slimmer, and arms and legs will suddenly pop out. The tadpole’s mouth also becomes much larger, as is fitting when becoming a frog. Dietary changes will occur as well. In its latter stages, a tadpole will take a liking to various insects, particularly crickets and aphids, but anything small enough to eat will probably do.

Unless you know what kind of frogs inhabit the pond your tadpole eggs came from, you probably won’t be able to tell what kind of a frog your pet tadpole will turn into. There are several thousand different species of frogs, and the tadpoles don’t vary much from species to species. You might even end up with a little toad. Toads go through the tadpole stage as well.