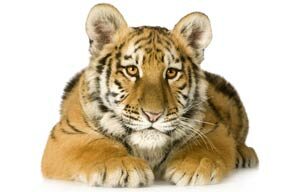 A Few Interesting Facts about Tigers

The tiger is the largest cat in the cat family.

A tiger can eat sixty pounds of meat in a meal. However, they never know when they might find their next meal–it can be several days before another prey is found and killed.

A tiger has teeth which are three inches long.

There are as many tigers living in captivity as there are in the wild.

Siberian tigers are the largest of all tigers. Their average length is over nine feet long and they weigh over 500 pounds.

Tigers are solitary, not social creatures.

One of the saddest facts about tigers is that there are less than six thousand left in the world.

Humans are a tiger’s biggest enemy. Between habitat loss and poaching, tigers could be completely extinct in as few as five years.

Tigers are sly and always try to stalk and ambush their prey.

Tigers do not purr like some other members of the cat family.

A male tiger often claims a territory which is around sixty miles long. A female’s range is less. A male tiger may allow a female tiger in his territory but never a male tiger.

When a tiger demonstrates submission to another tiger, he rolls on his back and shows his stomach.

The South China Tiger is the most endangered with only a maximum of eighty of the species existing in the wild and in captivity.

The weight of a tiger is estimated by the size of his paw and the depth it sinks into the ground,

Tigers hunt for food the entire time they are awake, but they are only successful on average one time out of every twenty times they go out.

Some Siberian tigers have weighed as much as 800 pounds.

Tigers are poached and their parts sold for use in Chinese medicine.

It is one of the facts about tigers that they can live to be twenty years old. Many who live in the wild die sooner.

Tigers have fantastic vision. They can see six times better than humans.

A male tiger reaches the age of maturity at around three years of age.

Tigers are born blind and completely dependent on their mothers. She usually only gives birth to two cubs. They stay with the mother until they are 2-3 years old, and just about mature.

Tigers will lie in the water to get out of the heat.

If you want to see tigers in the wild, try the Bandhavgarh National Park in India.

Tigers are diligent about marking their territory. They not only spray urine but scratch trees and place scat around the area.

A tiger sleeps most of the day, up to eighteen hours. The rest of the time is spent hunting.

One of the facts about tigers is that they have a total of thirty teeth.

95% of all tigers have disappeared in the last century.