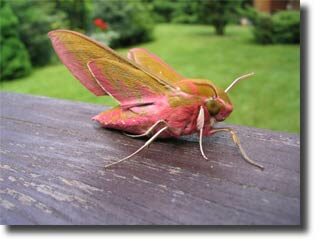 Typically, when people think of moths, they envision an annoying, dull insect that makes its way inside the house while the outside porch light is on but the Elephant Hawk moth proves that not all insects of this type of ugly.  The Latin name for this moth is Deilephila elpenor, a species found all over Wales, Ireland, and England, and in Scotland, this moth can be found in the western and southern regions.

The actual moth appears during the months of May to July and then from the latter part of July through September are the caterpillars.  While this moth lives in woodland clearings, in gardens, and around waste grounds, they love eating willow herbs, bedstraws, and nectar.  In fact, when this particular species of moth is found in flower gardens, it is usually near Fuchsias feeding although it also loves Petunia and Honeysuckle plants.

This insect has many fascinating features but one of the interesting facts about the Elephant Hawk moth is its size.  However, the moth’s vibrant pink color is captivating and unlike anything else you have ever seen.  While the wings have the standard brown on top, underneath is a bright pink, truly a beautiful sight.  Pink is also outlined on the wings, on the tip of the tail, and a very subtle pink in soft streaks on the back.  Therefore, seeing a moth of this kind is a real treat, something you would never expect.

The name, “Elephant Hawk moth” is derived from the caterpillar’s snout shaped like a trunk.  When in caterpillar form, the snout would be pulled inward whenever there is sense of fear.  When this happens, the head inflates, showing four unique eye markings on top, which are also very large.  For the caterpillars, most are brown but on occasion, you would spot a beautiful green colored one.  At maturity, the caterpillar goes to ground level where it stays until springtime when the Elephant Hawk moth emerges.

Another fascinating characteristic of the Elephant Hawk moth is its appearance during flight.  Due to its unusual coloring, most people agree that the moth has a shimmer of red and green when flying.  Unfortunately, once this species of moth reaches adulthood, it becomes prey for bats.  Initially, two subspecies of the Elephant Hawk moth were identified but these have since been eliminated from the list.

If you ever travel to parts of the world where the Elephant Hawk moth is found, it would be worth asking locals for locations to get a glimpse.  You might be thinking that it is just a moth but we recommend that you go to Google.com or Yahoo.com and in the search field, pull up photos of this moth so you can see for yourself what makes it such an interesting and beautiful creature.  Keep in mind that this is just one of many species found throughout the world that have something different from the common household moth with no color.