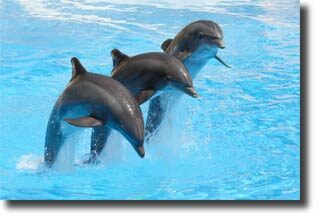 A dolphin’s habitat is something that many people find fascinating.  If you love marine animals and you are interested in learning more about how dolphins live, then this is the article for you.  When you fully understand how they live and survive you are more likely to have a new appreciation for them.  You may also come to realize that there are several steps you can take to help maintain the habitat that they so desperately need to grow and survive.

There are numerous different types of dolphins. Some of these animals live in rivers but many of them live in the ocean.  Most of the dolphins that live in rivers are actually becoming extinct because the waters are not being taking care of properly.  However, the bottlenose dolphin actually lives in the ocean.  They are found around the world in temperate and tropical waters.

The bottlenose dolphins habitat in the Pacific Ocean actually spans from northern Japan clear to Australia.  They can also be found from southern California to Chile.  When it is especially warm in the summer months they may actually be found as far as Monterey.  This species of dolphin can actually been seen in Hawaii from time to time.  They will go just about anywhere as long as it is warm enough for them, depending on the species.

It is interesting to know that the bottlenose dolphin’s habitat does not simply end in the Pacific Ocean.  When you think about the Atlantic Ocean they can be seen spanning from Nova Scotia to Patagonia.  They will also move along from Norway to South Africa.  It is easy to see that they can move along nicely if they are motivated to do so.  They can also be found in Mediterranean Sea and in the Indian Ocean as well.

These dolphins are actually seen in the harbors or bays of the waterways.  Some of the dolphins that you read about enjoy being in shallow, warmer waters.  Still others enjoy being in cool water and they will swim down very deep.  These beautiful animals are most likely going to move with the water and the food supplies.  That is why it is important to keep the water clean and free from pollution.

We do not want to ruin the waterways for our marine animals.  They need to be safe in the water in order for them to survive.  They need to be able to breathe and eat food that is not already consumed with pollution.  When we pollute our oceans, the fish take this into their bodies.  Then the dolphins consume the fish.  They are eating the pollution as well.  This makes them sick.  We also ruin the habitat by commercial fishing.  Fisherman may leave their nets in the water.  The dolphin will often get stuck in them.  This kills the dolphins or can severely injure them.

When we think about some of the river dolphins and how they have been harmed it is easy to see why they have started moving toward extinction.   We need to make a conscious effort to keep the dolphin’s habitat clean and free from waste that can harm them.  This is very important if we want them to thrive and reproduce so that they world can enjoy their beauty.  You can always spend time researching what you can do to save the dolphins habitat from further damage.  If you have ever seen a dolphin up close it is easy to see why we should work to save them and help them survive to their fullest potential.