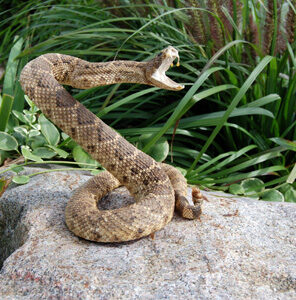 There are two major species of what are commonly called brown snakes. The “good” ones, residing mainly in the eastern part of the United States, are small, non-venomous, and eat mostly insects or small vertebrates. The other, the “bad “brown snake, is the Eastern Brown snake a native of Australia, and is one of the most highly venomous snakes in existence. There is a third brown snake, the Australian King Brown snake, which is one of the longest venomous snakes in the world, but technically is a member of the black snake family.

The discussion here centers on the brown snake found in the United States. This is a very common snake and one that can be picked up and handled without fear of a trip to the hospital. There is the brown snake and the Florida brown snake, and although there are subtle differences between the two, they are considered to be two subspecies and not two different species of snake.

Mistaken Identity – As harmless as the brown snake is, it is unfortunately mistaken for the venomous copperhead in some areas, and because of that is often killed. Close examination reveals significant differences between the two, but when one thinks “copperhead” one usually doesn’t attempt a closer inspection. Brown snakes are roughly the size of a small garter snake, rarely exceeding a foot in length, with a 6-inch long brown snake being quite typical of the species. Its color varies from dark brown to a somewhat grayish brown, with dark spots along its back and a light stripe along the side. The belly of the brown snake is a pinkish color.

The “City” Snake – Although the numbers of brown snakes are believed to have dwindled somewhat in recent years they are still plentiful enough to not be considered threatened and are therefore do not enjoy protective status. Brown snakes are more at home in urban areas than is the case with most snakes, and are often a common sight in residential areas. If brown snakes feel threatened or an attempt is made to handle them, they often rely on their prime weapon of self defense, that of releasing an unpleasant musk odor. They can bite, but seldom do, and they are small enough that their bite would pose no serious threat to humans.

A Good Neighbor And Companion – If you live along the eastern seaboard and have any litter at all in your yard, such as old boards lying around, or better yet logs, the chances are good that brown snakes will make a home on your property. Even ground cover often offers all the shelter a brown snake needs. They are almost always nice companions to have, as they are generally inoffensive and help keep the area clear of insects, worms or larvae, slugs, and in some cases mice. They can be kept as a pet, or more appropriately, kept in captivity, as long as they are provided with food to eat. A pet brown snake may or may not become used to its captor. It may accept being handled or may release musk and poop if an attempt is made to pick one up.

Brown snakes are nice to have around, and are definitely good snakes, unless one lives in Australia.