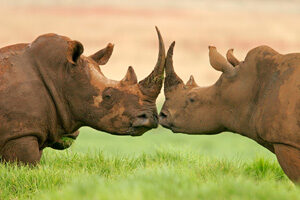 There are more than a few animals with horns or antlers. These horns are used for mating purposes and they are also used as weapons for fighting. They let other animals know who is in charge because they are a sign of a higher ranking and they can help to keep the animal cool. They act as a natural radiator because of the blood vessels at the bone’s core. Most people believe that all animals with horns are male but there are females that have these horns too.

Horns are made with keratin and bone and they appear on the head of the particular animal. The bone is at the core and it is surrounded by a keratin type shield. Animals that are born with horns keep them for life, unless they are removed. Unlike antlers, horns only protrude form the side of the head and do not branch out or change shape.

All horns are found on animals that are in the bovidae family. Some of these animals include antelope, sheep, cattle and goats. These animals can be found in Africa, Asia, Europe and North America. The shapes of these horns can vary. They can be curved, straight or spiraled. Usually these animals only have one set of horns but there are some with more than one set. Sheep can have more than one set.

Animals with horns and animals with antlers are clearly two different things. A horn is made up of a bone with keratin covering and antlers are actually a dead bone without a covering. Usually, only males of a species have antlers and they are shed every year and they will regrow the following year. Although these antlers do not have a keratin covering, they do have a fuzzy growth on the protruding bone. This is called a velvet covering and it protects the bone while it is growing. When the bone or antler is fully grown the velvet covering will peel and eventually fall off. It provides nutrients and blood to the antler while it is growing.

There is one exception to the horn and antler rule. The pronghorn antelope has a variation of both. It has a horn like bone with a keratin covering but the difference is that this horn will shed year after year.  These horns can also branch out, unlike most horns that only grow one way. But this is only seen in male pronghorn antelopes.

Rhinos are another type of animals with horns. But this type of horn isn’t really considered a horn. There is no bone in a rhino horn, it is made up of only keratin. Humans have hair and fingernails that are made of strictly keratin and this is the same substance that makes up the horn of a rhino. So people may refer to this growth on the rhino as a horn but technically it is not.

Humans use horns and antlers for many reasons. When a hunter kills animals with horns it may be because he wants these horns as a trophy. He may even discard the animal and use only the horn for decoration purposes. Some animals have even been put on an endangered species list because people only hunt them for their horns. These horns can also be used as musical instruments and to drink out of. In China, antelope horns are used medicinally. Horns can also be used to make certain types of glue and they can be used to make furniture or decorations on furniture. People also use horns as flasks to carry gunpowder or other materials.